According To The Erdogan Junta Regime, Peace Means Terrorism, So If You Are Anti-War, Opposed To The Invasion Of Syria Your Going To Jail, 600 Now In Notorious Turkish Prisons !

As Turkey’s invasion of northern Syria continues, so too does their policy of arresting anyone seen as even sort of opposed to the attack. The Turkish Interior Ministry now says 449 people have been detained for criticizing the war on social media, and 124 more detained for taking part in actual protests. 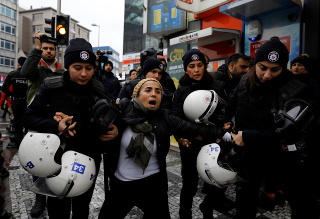 Riot police detain a demonstrator during a protest against Turkey’s military operation in Syria’s Afrin region, in Istanbul, Turkey

Turkey’s Erdogan government doesn’t have a lot of patience for dissent, or for Kurds. Unsurprisingly, dissent about a war against Kurds is being cracked down on intensely. Erdogan’s spokesman warned that statements criticizing the war amount to statements “glorifying terrorism,” and that the government is just enforcing the law as written.

With Turkey’s largely state-run media praising the war, public support for it is still relatively strong. Opposition is mostly in the ethnic Kurdish region, which Turkey is more than willing to crack down on at any rate, and political opponents.

When other NGOs issue statements against the war, as did a medical union in the country, President Erdogan has condemned them as traitors, and arrested 11 of their senior members for a statement calling for “peace immediately.”

With the war continuing and casualties rising, war exhaustion is inevitable. For now,however, expressing opposition to the conflict is a very dangerous crime indeed in Turkey.

21 February
2018
Incredible, The Audacity Of The Turkish Regime Attacking The Syrian Army In...
2156

24 January
2018
Turkey Says It Will Coordinate Military Operation In Afrin With Iran And Russia...
3049