After The Elections In Lebanon Israel Has Gone Mad, Calling For War And Have Stated That The Lebanese Government And People Are All Hezbollah !

With Sunday’s parliamentary election showing substantial gains for Hezbollah and its allies, Israel is angrily condemning them once again. Naftali Bennett, the hawkish leader of Jewish Home, insists Israel should consider that “Lebanon equals Hezbollah” from now on. 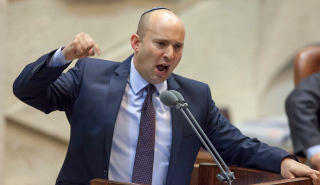 Bennett envisions that having real meaning during the next war with Lebanon, which Israel’s far-right government always believes is imminent. He says Israel should no longer differentiate between Hezbollah and anything else in Lebanon, and hold the country as a whole responsible for everything they’d normally blame on Hezbollah.

Hezbollah is a substantial political party in Lebanon, and after the election controls about 10% of parliament. Their political bloc has in excess of half the seats, but the largest party in the bloc is actually a Maronite Christian party.

Some Israeli analysts suggest they should be pleased with the election results. A majority for a single bloc within Lebanon, something they’ve struggled to maintain in recent years, could mean a period of renewed stability, which would benefit both Lebanon and its neighbors.

12 October
2017
Breaking News: The Trump Regime Withdraws From UNESCO, Due To The Organization...
1957