Albanian Scum Lord Hashim Thaci Threatens Serbia With Guns, We Shall See Thaci, We Shall See, Soon Kosovo Will Return To Serbia Where It Belongs !

Thaci said earlier that he would respond to alleged threats from Serbia "with guns, just like 19 years ago."

"Read Thaci's words carefully, it wasn't his guns in 1999" ~ And they can say what they wish... I've really no intention of showing who's stronger," Vucic said. 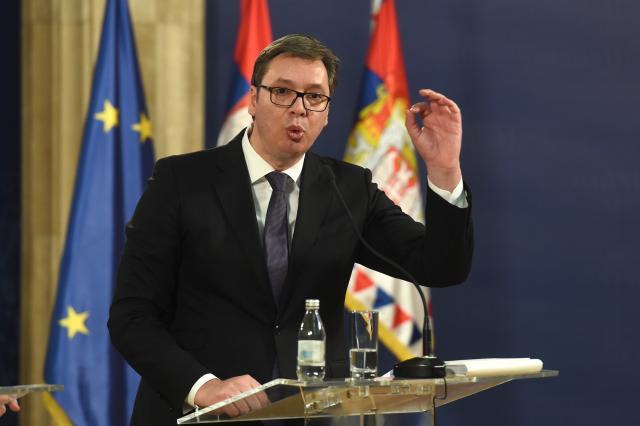 Serbia is engaged in politics of peace, and will not deal with guns and weapons, President Aleksandar Vucic said in response to the threats by Hashim Thaci.

Vucic, who was today in Mostar, Bosnia-Herzegovina, said that it was "up to us to respond to Thaci's mention of guns calmly," and then recalled that "it was not his guns, but some foreign planes that were destroying Serbia."

Vucic added that Thaci's statement should be "carefully read" - i.e., him saying that 19 years ago, the border between "the two countries of the Albanian nation" was removed.

"Some from the international community should be asked what they think about that, and whether that is why Serbia was attacked in 1999," Vucic noted, referring to NATO's bombing of his country.

"It is up to us to respond calmly, patiently, to say that we want freedom of movement, knowledge exchange, that we want a greater trade exchange," Vucic was quoted as saying.

"And they can say what they wish... I've really no intention of showing who's stronger," Vucic said. 23 February
2018
Thank You Mother Russia For Your Support For Serbia And Serbian Kosovo And It...
2073

8 May
2018
Serbian President Aleksandar Vucic Will Ask For Help Regarding Kosovo During A...
947

4 November
2017
Bravo For Serbia As Countries Are Slowly Removing Themselves From A List That...
1762