All Syrian Militant Terrorists Who Are Responsible For Recent Attacks On Hmeimim Airbase Have Been Found And Liquidated ! ~ Russian Defense Ministry

Russia’s Defense Ministry has issued a statement Friday claiming they have found and killed the Syrian militants responsible for a recent series of artillery and drone attacks against Hmeimim Airbase and Tartus port. 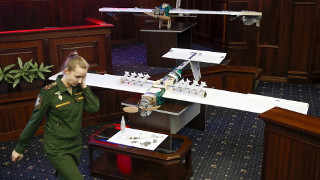 The Russian statement was brief, saying that they’d killed the militants, and also destroyed a substantial stockpile of drones of the type responsible for recent failed attacks. They said the attack was in Idlib Province.

The first of the drones sent against Hmeimim was described as little more than a wooden frame with an engine and landmine strapped to it. The later flurry of drones appeared to have GPS navigation and other improvements.

Russian officials suggested that the GPS navigation suggested a foreign power, likely the US, was backing the strikes, though ultimately neither drone salvo did any actual damage, with Russian shooting down most of them, and the others just crashing.

18 June
2018
American Drones Attack Syrian Military Forces, There Are Casualties But The...
1025

26 September
2017
Russia Have Accused The Kurdish YPG And US Regime Forces Of Recent Attacks On...
2188

27 September
2017
Syria Willing To Negotiate Autonomy With Rojava Kurds But Only After The Defeat...
3755

25 November
2017
The Proud Army Of Donetsk Republic, Defending Our Citizens Day After Day Have...
1336

28 December
2017
U.S. And Coalition Officials Have Stated That They Will Not Target Terrorist...
1228

21 January
2018
The Murderous Regime Of The Trump Administration, The Slaughter Of Innocent...
1978