Anti-Imperialism And Anti-War Rallies Across The U.S. And The UK Denouncing The Trump Regimes Attack On Syria ! (VIDEO & PHOTOS)

People in several cities of the US and the UK, which together with France launched airstrikes on Syria following the alleged government chemical attack in Douma, join anti-imperialism and anti-war rallies demanding “US out of Syria”; more are planned.

ANTI-WAR PROTESTS HIT UK, US IN A SHOW OF SOLIDARITY WITH SYRIA !

On the day after the joint attack on alleged chemical weapons facilities in Syria, anti-war protesters gathered in New York City’ Union Square to call on the world to “defend Syria and defeat US imperialism.” The posters read “US out of Syria and the near East” and “No War on Syria” and “US/NATO Get Your Bloody Hands Off Syria.”

One protester, Eva Sahanna, told Press TV “The United States has no right to send these airstrikes over to Syria and its allies have no right to do so either. There isn’t evidence that (Syrian President Bashar al-) Assad used chemical weapons.”

Scores demonstrated in front of the White House in Washington, DC with banners, demanding “Stop racism and the war machine at home and abroad.”

Rallies and marches also took place in Los Angeles, Philadelphia, Portland, Sacramento and other US cities.

More are to come on April 15 and within the next week in New York City, Las Vegas and other American cities. The activists spread the word about the protests online, calling for more action on Facebook and Twitter.

People in the UK, which also took part in the attack on Syria, staged their own anti-war and anti-racism marches and rallies in London, Liverpool, Manchester, Cardiff and others.

On April 14, France, the United Kingdom, and the United States launched strikes on a number of targets in Syria in response to the alleged chemical attack in Douma, Syria. The Syrian leadership, in its turn, denied any involvement in the attack, and invited the experts from the OPCW to investigate into the reports.

The coalition forces launched over 100 missiles in Syria, most of which were shot down by Syrian air defense.

The OPCW press service said that the organization’s mission had arrived in Damascus. A Syrian government source told Russian reporters that OPCW experts were planning to start their activities in the Syrian area of Eastern Ghouta, where a chemical attack allegedly took place. 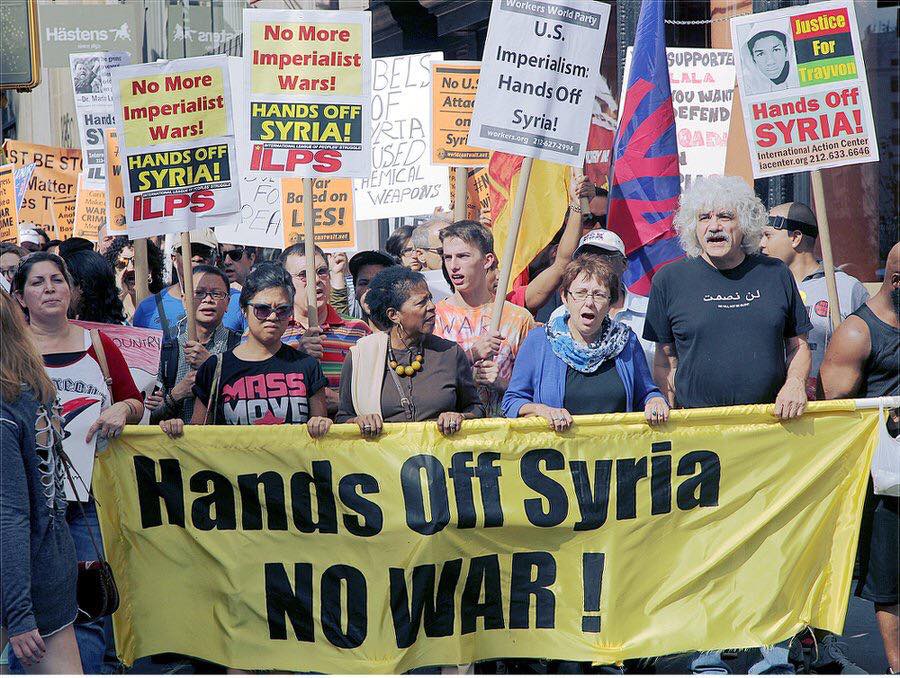 22 April
2018
Chemical Inspectors Finally Arrive In Douma After A Long Delay Being Blocked By...
1252

23 April
2018
Chemical Inspectors OPCW Have Confirmed That They Have Finally Collected...
1280

19 April
2018
Sickening As The United Nations Once Again Blocks Chemical Inspectors OPCW From...
1850

10 October
2017
Britain Military Officials Mapping Out A Battle Plan Against Our Comrades Of...
1823

27 January
2018
Murderous Trump Regime Trying Everything To Implement It's Own Policy On...
1197