A Beautiful Nation Of Creativity, Serbia Has Been Selected To Host The Prestigious IFTR, International Federation Of Theater Research !

According to Prime Minister Ana Brnabic, it will be an extremely important manifestation for Serbia and an indicator of creativity that we have in the country.

The World Congress of the International Federation of Theater Research (IFTR) will be held from 9 to 13 July in Belgrade.~

Speaking at a press conference on the organization of this event, Brnabic congratulated the organizers of the congress in Belgrade on having won in the final round of the competition in Shanghai and got a rare opportunity to host the event that is held every four years.

"I am proud of the fact that with limited resources you have managed to win against those who are much bigger than you and who certainly have a much bigger systemic support. This speaks about your quality," she said.

Brnabic stressed that the organization of the World Congress goes hand in hand with what the Serbian government is doing in order to improve the overall environment in the country.

There has never been a successful society that was not based on culture, education, science and creativity, the prime minister said, adding that this is a form of significant cultural diplomacy that Serbia forgot and drop out of sight and which we should remember.

Brnabic, who is the sponsor of the World Congress, said that this event will gather around 1,000 theoreticians and performers of theater art from 54 countries of the world.

"I hope that my patronage as prime minister will be a clear signal of the road we are taking and of the priorities of this government," she concluded.

The World Congress of the International Federation for Theater Research will include 890 lectures by the most important researchers of theater and performing arts from 54 countries, as well as 11 performances and show cases of domestic performances, and will gather more than 80 volunteers from the country and abroad.

The theme of the Congress will be "Theater and migration – theater, nation and identity: between migration and stasis." 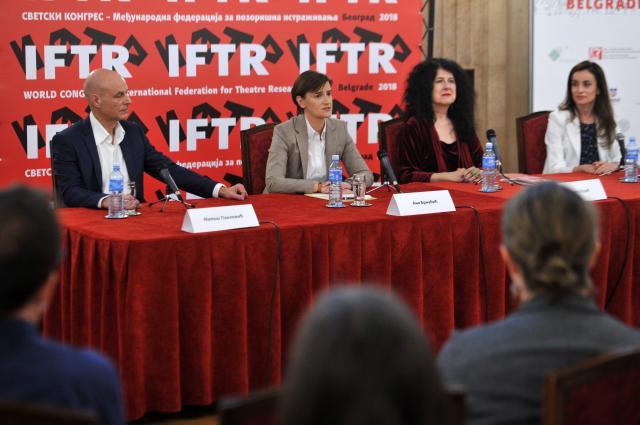 21 August
2017
BREAKING NEWS, Entire Serbian Embassy Staff Have Left Macedonia Due To The...
4726

31 August
2017
Hero General Ratko Mladic To Be Released For Medical Treatment In Serbia !
3880

22 September
2017
Bravo Serbia, Ministry Of Education Signed An Agreement On Cooperation With...
2016

6 October
2017
A Serious Squadron, Convincingly The Strongest In The Region, Great Serbia...
1832

6 October
2017
Secret Meeting In Belgrade, US Representative For Ukraine Kurt Volker To Meet...
1597

10 November
2017
Things Are Getting Hot Between The Nazi Ukraine Junta And Serbia, Ivica Dacic...
2438

12 November
2017
Serbian Park In Belgrade Is Renamed In Honor Of The Russian Army Ensemble...
3553

18 January
2018
Serbian Politician Oliver Ivanovic Killed By Albanian Thugs To Be Buried In...
2054

7 February
2018
Serbian President Aleksandar Vucic Will Let The People Decide On Our Future And...
1611