The Blame Game Continues As Dutch Investigators Conclude That The MH17 Plane Was Shot Down By Russian Forces !

According to the latest information from an international investigation team, the missile belonged to the Russian military forces stationed in Kursk, and it was fired by the 53rd Air Defense Brigade.

Is this final: Russians shot down MH17 after all~ But, Moscow today rejected an international investigation that found a Russian missile downed flight MH17 over Ukraine in 2014, saying no such weapon had ever crossed the Russian-Ukrainian border and blaming Kiev for the tragedy.

The missile that downed a Malaysian plane on flight MH17 above Ukraine in 2014, when 298 people died, was fired by Russia, according to investigators.~

This information was presented today, and it is also underlined it is the result of a multi-year investigation. The investigative team was led by Dutchman Wilbert Paulissen, who said that the plane was shot down by a BUK-type rocket fired from the rebel-controlled territory of Ukraine.

Although the Russians have denied the whole that the missile fired on the Malaysian plane was theirs, Paulissen refuted it today saying the investigation came to the conclusion that all vehicles that transported the aforementioned missile belonged to the Russian armed forces.

The BBC recalls that the MH17 investigation has been under way for four years now and that a joint investigation team has been set up to this end, which includes experts from the Netherlands, Australia, Belgium, Malaysia, and Ukraine.

Moscow today rejected an international investigation that found a Russian missile downed flight MH17 over Ukraine in 2014, saying no such weapon had ever crossed the Russian-Ukrainian border and blaming Kiev for the tragedy. “Not a single anti-aircraft missile system from the Russian Federation has ever crossed the Russia-Ukraine border,” the defence ministry said in a statement carried by local news agencies.

The ministry accused Ukraine of being behind the disaster in which 298 people died, saying it had presented evidence that “showed the involvement of Ukrainian units using (Soviet-designed) BUK missiles”. Earlier in the day, a Netherlands-led joint investigation team said — for the first time — that the missile which brought down the plane over eastern Ukraine came from a Russian military brigade. The group “has come to the conclusion that the BUK-TELAR that shot down MH17 came from 53rd Anti-aircraft Missile Brigade based in Kursk in Russia,” top Dutch investigator Wilbert Paulissen said.

He told reporters gathered for a press conference that “the 53rd Brigade forms part of the Russian armed forces.” The Malaysian Airlines Boeing 777 was blown out of the sky over conflict-torn eastern Ukraine on July 17, 2014 while en route from Amsterdam to Kuala Lumpur. The Russian foreign ministry later said “it is clear that these gratuitous accusations are an attempt to discredit our nation in the eyes of the international community.”

It said investigators had presented “no evidence” to back up their allegation except for a video which it said was based on fabricated information from a blogging site. Ukraine and its Western allies have long accused Russia of funnelling troops and arms across the border to fan the flames of the conflict. Moscow has denied the allegations despite overwhelming evidence that it has been involved in the fighting and its explicit political support for the rebels.

Investigators had previously concluded that the plane was hit by a Russian-made BUK missile system brought in from Russia and fired from territory in Ukraine held by Moscow-backed rebels. But they had stopped short of directly saying who pulled the trigger. Now the team has painstakingly recreated the route taken by the missile convoy from Kursk towards the border into Ukraine using videos and photos. 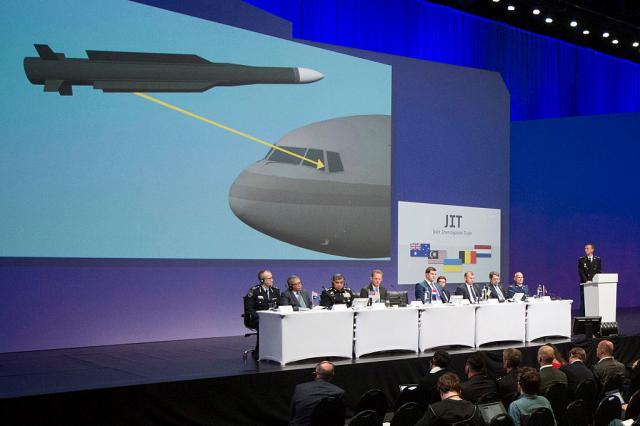 25 August
2017
Poroshenko blames Russia of all his misfortunes
2385

1 September
2017
OSCE Condemns The Deplorable Actions By The Ukraine Junta Gestapo For Arresting...
1950