Catalonia's Human Tower Of Independence, Crowds Fill Up Bull Ring As Campaign For Breaking Away From Spain Goes Into Full Swing ! (PHOTOS)

(PHOTOS) The Catalonian government on Thursday launched its official campaign for an independence referendum, which Madrid has declared illegal, buoyed by the support of the capital Barcelona.

Crowds filled a bull ring in the northeastern city of Tarragona, applauding and shouting “We will vote!” as regional president Carles Puigdemont arrived to rally support for the Oct. 1 vote.

In a boost for the credibility of the referendum, the mayor of Barcelona said earlier on Thursday that the vote would go ahead in the city, having previously expressed concern that civil servants involved may lose their jobs.

A town hall spokesman was unable to comment further or explain how civil servants could be protected.

Puigdemont himself is facing criminal charges of misuse of public money, disobedience and abuse of office for organizing the referendum, and prosecutors have summoned hundreds of the region’s mayors for questioning.

Police raided a newspaper office and a printing press last week, looking for signs of preparation, and the regional court has ordered Civil Guard agents to shut down web pages providing information about the referendum.

Regional home affairs councillor Joaquim Forn said there was a bigger than usual presence of national police in Catalonia.

“They are moving throughout the region. They must be looking for ballot boxes,” he told RAC1 radio.

A majority of Catalonia’s 5.5 million voters want to have their say on the northeastern region’s relationship with Spain, but the independence cause has lost support in recent years and surveys indicate less than 50 percent of the population would choose full self-rule. 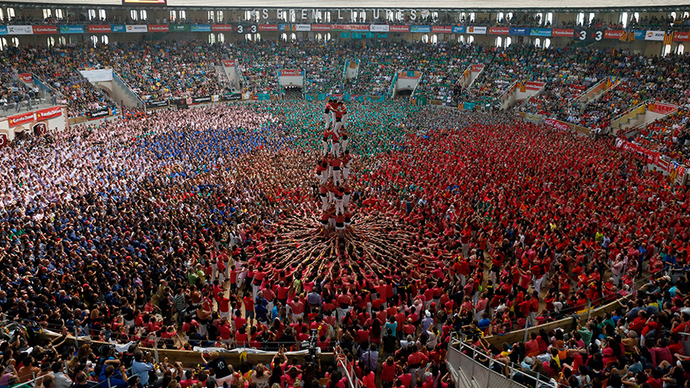 4 October
2017
Catalan To Proclaim Independence Within Days As Fascist King Of Spain Screams...
1320

10 October
2017
Catalonia Under Pressure, France And Germany Against Catalan Independence And...
1657

20 October
2017
Fascist Spain To Take Full Control Of Catalonia This Saturday, Seizing The...
1295

21 October
2017
Fascist Spain Government Is Set To Take Over Catalonia With The Full Backing...
1282

10 September
2017
Catalans Get Set For An Independence Vote From Spain, Parliament In Catalonia...
1179

10 September
2017
War Of Words Between Catalonia And The Fascist Government Of Spain, Threats To...
1576

24 September
2017
Spain Wanting To Crush The Catalan Independence Movement, Now Say It Is All...
1696

20 October
2017
If The Fascist Government Of Spain Moves In On Our State Catalonia On Saturday...
1369

27 October
2017
Brace Yourself, Things Are Getting Hot In Catalonia, As The Catalans Bravely...
1450