Carles Puigdemont in custody in Belgium after turning himself in

Ousted president of Catalonia awaits decision on possible extradition to Spain along with four of his former ministers !

Catalonia’s ousted president, Carles Puigdemont, and four of his former ministers are in Belgian custody awaiting a decision on their possible extradition to Spain to face charges of sedition and rebellion after turning themselves into police.

The five presented themselves to the federal judicial police in Brussels at 9.17am on Sunday, after which they were questioned by an investigative judge, who has 24 hours to decide whether to order their formal arrest. 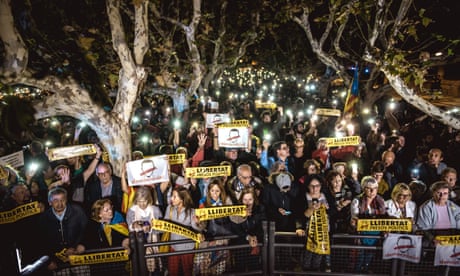 The secessionist politicians fled to Belgium on Monday after the Spanish authorities removed Puigdemont and his cabinet from office for pushing ahead with a declaration of independence following an illegal referendum.

From his self-imposed exile, Puigdemont claimed he would not receive a fair trial in Spain, but promised to cooperate with the Belgian justice system.

The Belgian secretary of state for migration, Theo Francken, a Flemish nationalist, had just a day before their arrival suggested that it was realistic to think that Belgium could offer the Catalan leadership political asylum.

Gilles Dejemeppe, a spokesman for the federal prosecutor, said the Belgian authorities had been in contact with the Catalan separatists before they gave themselves up to the authorities on Sunday morning.

The investigating judge’s options, he said, now ranged from “refusal to execute the European arrest, arresting the people involved, releasing them on conditions or under bail”.

Only the five, their lawyer and an interpreter were present at Sunday’s hearing. It is understood they chose to have the proceedings heard in Dutch.

On Friday, the Spanish government issued European arrest warrants against Puigdemont, Antoni Comín, Clara Ponsatí, Meritxell Serret and Lluís Puig for trying to “illegally change the organisation of the state through a secessionist process that ignores the constitution”.

The formal charges, punishable by 30 years in prison, are rebellion, sedition, embezzlement of public funds and disobedience to authority, for their role in organising the referendum on Catalan independence on 1 October.

It is up to the Belgian authorities to decide whether they recognise the charges and whether they will execute Spain’s European arrest warrant. From arrest to extradition, the entire process could take up to three months to complete, including time for likely appeals.

Such a delay would give Puigdemont the opportunity to participate in the snap regional election called by Spain’s government for Catalonia on 21 December.

A senior official of Puigdemont’s party, the centre-right Democratic party of Catalonia, said on Sunday this was the party’s intention.

A spokesman for the Spanish government, Íñigo Méndez de Vigo, has said that any politician can run in the election unless he or she has been convicted of a crime.

Pro-union parties are seeking to rally support to win back control of the regional parliament in Barcelona, while pro-secession parties are debating whether or not to form one grand coalition for the upcoming ballot. The parties have until Tuesday to register as coalitions or they must run separately.

Catalonia’s former regional president Artur Mas told Catalan public television on Sunday that he backed a fusion of parties for the December vote.

He said the main goals must be to recover the self-rule of the region and the release of the jailed separatists rather than pursue independence.

Mas said: “Under these exceptional circumstances that our country is going through, don’t we have to substitute the normal and logical competition for the cooperation we all need?

“If we add the issue of independence, we won’t get as many people to support us.”

An opinion poll published by Barcelona’s La Vanguardia newspaper on Sunday forecasts a tight electoral race between the parties for and against Catalonia severing its ties with the rest of Spain.

The poll predicts that pro-secession parties would win 66-69 seats. They won 72 two years ago. Sixty-eight seats are needed for a majority.

In a sign of the growing headache the crisis is causing the Belgian coalition government, the country’s deputy prime minister, Jan Jambon, from the Flemish nationalist party, questioned Spain’s handling of the crisis in Catalonia and suggested the EU should intervene.

“When the police hit people, we can still ask questions,” he said. “When the Spanish state has locked two opinion leaders, I have questions. And now the Spanish government will act in the place of a democratically elected government?

“Members of a government are put in prison. What have they done wrong? Simply apply the mandate they received from their constituents.”

Spanish prosecutors are investigating 20 regional politicians for rebellion and other crimes that could be punishable by up to 30 years in prison.

On Thursday, nine of Puigdemont’s sacked cabinet were ordered by Spain’s high court to be held on remand pending an investigation and potential trial. One member of the dismissed cabinet, Santi Vila, was freed after paying bail of €50,000 on Friday.

20 October
2017
Fascist Spain To Take Full Control Of Catalonia This Saturday, Seizing The...
1784

11 March
2018
The Spanish Regime Will Not Release Catalan Leader From Prison, Jordi Sanchez...
1712

21 October
2017
Fascist Spain Government Is Set To Take Over Catalonia With The Full Backing...
1645

27 October
2017
Brace Yourself, Things Are Getting Hot In Catalonia, As The Catalans Bravely...
1982

10 October
2017
Catalonia Under Pressure, France And Germany Against Catalan Independence And...
2093

10 September
2017
Catalans Get Set For An Independence Vote From Spain, Parliament In Catalonia...
1532

10 September
2017
War Of Words Between Catalonia And The Fascist Government Of Spain, Threats To...
2191

20 October
2017
If The Fascist Government Of Spain Moves In On Our State Catalonia On Saturday...
1817