In China Our Beloved Leader Of North Korea Kim Jong Un Promises To Denuclearize If The Trump Regime Responds ' With Goodwill ' ! (PHOTOS)

North Korean leader Kim Jong-un has pledged to denuclearise the Korean Peninsula during his first meeting with Chinese President Xi Jinping in Beijing, according to China's state news agency.

Kim Jong-un ready to give up nuclear weapons if S Korea, US respond 'with goodwill', Beijing says after landmark visit.~

Xinhua on Wednesday quoted Kim saying that the issue could be resolved if South Korea and the United States respond to Pyongyang's efforts "with goodwill".

"It is our consistent stand to be committed to denuclearisation on the peninsula, in accordance with the will of late President Kim Il-sung and late General Secretary Kim Jong-il," Kim said, referring to his grandfather and father, according to the statement issued by China's foreign ministry.

"The issue of denuclearisation of the Korean Peninsula can be resolved, if South Korea and the United States respond to our efforts with goodwill, create an atmosphere of peace and stability while taking progressive and synchronous measures for the realisation of peace."

Kim was also reported to have reaffirmed his willingness to meet US President Donald Trump. It was the first official mention of the planned event by North Korea.

China and North Korea both confirmed that Kim had visited Beijing and met Xi during what China's foreign ministry called an unofficial visit to China from Sunday to Wednesday.

Xi held talks with Kim at the Great Hall of the People in Beijing, and he and his wife Peng Liyuan hosted a banquet for Kim and his wife Ri Sol-ju, Xinhua said. They also watched an art performance together, according to the news agency.

The China visit was Kim's first known trip outside North Korea since he assumed power in 2011 and is believed by analysts to be a preparation for upcoming summits with South Korea and the US.

North Korea's KCNA news agency made no mention of Kim's pledge to denuclearise, or his anticipated meeting with Trump that is planned for sometime in May.

The White House said the Chinese government contacted them on Tuesday to tell US officials about Kim's visit to China.

Sarah Huckabee Sanders, White House spokeswoman, said the briefing included a "personal message from President Xi to President Trump," which was conveyed to the president. She did not say what that message entailed.

"I think improvement in the North Korea-China relationship ahead of the inter-Korean summit and US-North Korea summit, will be helpful in solving the problem in the Korean Peninsula, such as denuclearisation and establishment of peace." 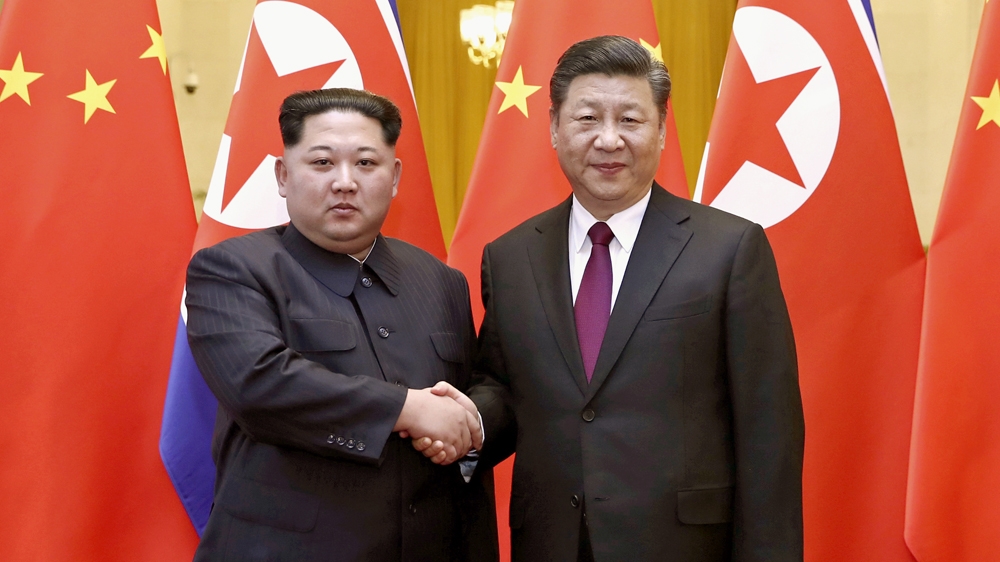 23 September
2017
Russia Calls It A Kindergarten Fight Between US Regime Leader Trump And Our...
2311

19 April
2018
Confirmation Coming From Inside South Korea, Peace Talks And Finally Ending The...
1446

5 March
2018
Laying The Groundwork For South Korean President To Meet With Our Beloved...
1397