Conflicting details continue to come out of eastern Syria after the Wednesday ambush by ISIS forces against a Syrian military outpost near the Iraqi border. The Syrian Observatory for Human Rights is now putting the death toll at 35. 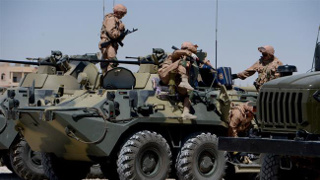 Among the 35, the Observatory claimed nine Russians were killed. They said some, but not all of the Russians were troops. All 26 Syrians killed were claimed to be Syrian military forces according to the statement.

This is unusual, as casualties in eastern Syria tend to center heavily on militias and mercenaries. It would be very strange indeed for the Syrian military to be the majority of casualties in any remote area, as they tend to rely heavily on paramilitary aid in those provinces.

The Russian Defense Ministry is claiming four Russian troops were killed in the incident. This would suggest that the other five Russians were mercenaries, which have been popularly used by Syria, particularly in the Deir Ezzor Province.

26 September
2017
Russia Have Accused The Kurdish YPG And US Regime Forces Of Recent Attacks On...
2787

1 May
2018
Trump CIA Terrorists ISIS Mutilating Their Prisoners, Turning Them Into...
6799

25 September
2017
As a result of shelling by ISIS, Russian general Asapov perished
2220

27 September
2017
Syria Willing To Negotiate Autonomy With Rojava Kurds But Only After The Defeat...
4418

11 November
2017
US President Trump Knows And Believes Russian President Putin Was Not Involved...
1780