Confirmation, 52 Dead Syrian Soldiers And Iraqi Militia, But Who Was Behind The Airstrikes, Some Now Accusing Israel Behind The Deadly Strike !

A series of airstrikes from as-yet-unknown origins pounded a Syrian military site near al-Bukamal on the Iraqi border, on Sunday night. At least 52 fighters were killed in the attacks, including a number of Syrian troops. 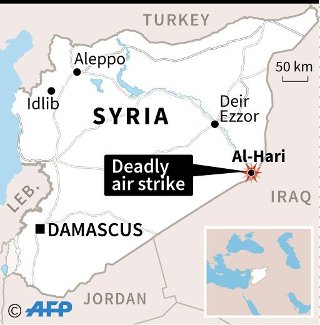 The strike hit just half a mile from the Iraqi border, and near the main border crossing. Al-Bukamal was recently contested by ISIS, which is why more Syrian forces and allied militias are in the area. Most of the dead were, according to the Syrian Observatory, Iraqi Shi’ite militia fighters.

But who was behind the airstrikes? That’s less certain. Syrian state media initially attributed the attack to US drones, but Centcom has subsequently issued a statement insisting that, while aware of the attacks, neither the US nor any coalition member was involved.

Some reports early Monday have accused Israel of the strike. Israel certainly is no stranger to attacking Syria, and some Hezbollah fighters were killed in the incident. It would be unusual, however, for Israel to strike this far east, particularly on a target that’s on the Iraqi border.

18 June
2018
American Drones Attack Syrian Military Forces, There Are Casualties But The...
1643

21 January
2018
The Murderous Regime Of The Trump Administration, The Slaughter Of Innocent...
2826

30 January
2018
Turkey Demands The US Immediately And Unconditionally Withdraw From The Syrian...
1634

22 May
2018
Celebrations In Yarmouk And Damascus As The Proud Syrian Army Wipe Out Donald...
1398