Day Of Remembrance, An Orthodox Pravo Slav Requiem For The Serb Victims Of Nazi Croatian Attack In 1995, 283 Slaughtered Including 56 Women ! (PHOTOS)

According to the Veritas Center, on May 1 and 2, 1995 283 people, including 114 civilians and 11 militiamen were killed or disappeared, while 133 others remain listed as missing, including 59 civilians and 27 women.

An Orthodox requiem service at St. Marko's Church in Belgrade on Tuesday marked 23 years since the suffering of Serbs in Western Slavonija in Croatia.~

More than 16,000 members of the Croatian armed forces moved against Serbs in the area in an operation dubbed Bljesak ("Flash"). Serbs in the area numbered 15,000 inhabitants and about 4,000 soldiers. UN forces protecting the area had withdrawn.

A few days later, Croatia captured the entire area, while tens of thousands of Serbs fled to Serbia and the Serb Republic.

The coordination of Serb associations of families of the missing and murdered persons in the territory of the former Yugoslavia sent earlier today a request to the competent authorities of Croatia to bring to justice the organizers and perpetrators of war crimes against innocent Serb civilians in Western Slavonija.

"Instead of Croatian officials celebrating the 'Bljesak' operation every year for over twenty years, it would be civilized, humane and human for Croatian officials to condemn the crimes committed in the said operation, offer a public apology to the families of victims, and bring the perpetrators to justice," they said.

As stated, without this and without clearly facing the past, "it will not be possible to establish normal inter-ethnic relations between Croatian and Serbian people, which both are in dire need of." 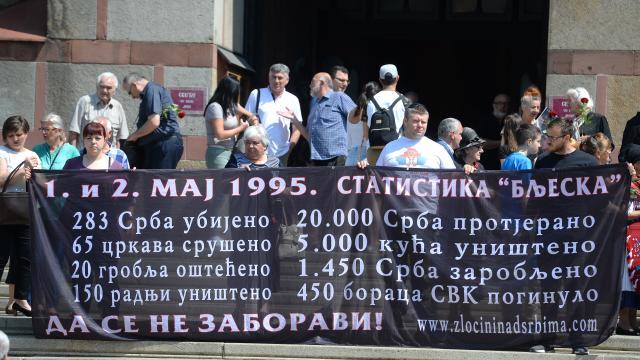 10 November
2017
Things Are Getting Hot Between The Nazi Ukraine Junta And Serbia, Ivica Dacic...
2448

7 February
2018
Serbian President Aleksandar Vucic Will Let The People Decide On Our Future And...
1617

24 April
2018
Serbia To Build Museums Dedicated To Holocaust Victims, A Reminder To The World...
1786

21 August
2017
BREAKING NEWS, Entire Serbian Embassy Staff Have Left Macedonia Due To The...
4743

31 August
2017
Hero General Ratko Mladic To Be Released For Medical Treatment In Serbia !
3891

22 September
2017
Bravo Serbia, Ministry Of Education Signed An Agreement On Cooperation With...
2028

6 October
2017
A Serious Squadron, Convincingly The Strongest In The Region, Great Serbia...
1842

6 October
2017
Secret Meeting In Belgrade, US Representative For Ukraine Kurt Volker To Meet...
1603