ON FRIDAY NIGHT, President Trump ordered the U.S. military to conduct a bombing attack against the government of Syria without congressional authorization. How can this be constitutional, given the fact that Article I, Section 8 of America’s founding document declares that “The Congress shall have Power … To declare War”?

The deeply bizarre and alarming answer is that Trump almost certainly does have some purported legal justification provided to him by the Justice Department’s Office of Legal Counsel — but no one else, including Congress, can read it.

The Office of Legal Counsel is often called the Supreme Court of the executive branch, providing opinions on how the president and government agencies should interpret the law.

We know that Trump received a top secret OLC opinion justifying the previous U.S. strike on Syria on April 6, 2017. Friday’s bombing undoubtedly relied on the same memo or one with similar reasoning.

So while over 80 members of Congress wrote to Trump on Friday night stating that “engaging our military in Syria … without prior congressional authorization would violate the separation of powers that is clearly delineated in the Constitution,” their action has no impact. The military will rely on the OLC’s opinion that, constitutionally speaking, Trump’s orders were perfectly fine. And it will be quite difficult for members of Congress to argue otherwise, since they don’t even know what the Trump administration’s precise rationale is.

Today, @RepZoeLofgren @RepBarbaraLee @RepThomasMassie and I sent a bipartisan letter to @POTUS—cosigned by 84 of our colleagues—demanding that the president not commence offensive military action against Syria without congressional approval, as the Constitution requires.

It is not unprecedented for the OLC’s reasoning to be classified. Over 20 percent of its opinions between 1998 and 2013 have been secret.

However, these OLC memos were generally written on government actions that were themselves classified. One notorious example is the so-called “torture memos” produced by the OLC during the George W. Bush administration.

What makes Trump’s actions new, according to several legal experts I spoke with, is that previous presidents appear to have always made public their legal justification for any overt military action on a significant scale. No matter how shoddy their explanations were, this at least made debate possible.

The only reason the existence of the 2017 OLC memo on Syria is public knowledge is because the organization Protect Democracy filed a lawsuit to compel the Justice Department to comply with a Freedom of Information Act request that the OLC provide “the President’s legal authority to launch such a strike.”

The OLC refused — but did produce an index of relevant documents. The first on the list is key: As described by the OLC, it is a “Legal Memo” that “is currently classified TOP SECRET.”

Soon after the 2017 strikes, two prominent Democrats, Sen. Tim Kaine of Virginia and Rep. Adam Schiff from California, wrote to Trump and requested “a detailed analysis of the legal precedents and authorities supporting the action in Syria.” They have not received any response.

SO WHAT DOES the OLC’s secret memo say? Obviously it’s impossible to be certain, but it is possible to make educated guesses.

James Madison, the Constitution’s main architect, explained that the power to declare war must be “fully and exclusively vested” in Congress because history showed that “the executive is the department of power most distinguished by its propensity to war: hence it is the practice of all states, in proportion as they are free, to disarm this propensity of its influence.”

The Constitution did, to some degree, work to restrain this presidential tendency through World War II. Since then, however, both Republican and Democratic presidents have made concerted efforts to break the Constitution’s chains, using extremely strained interpretations of the Constitution itself.

In 1950 President Truman sent hundreds of thousands of troops to Korea to fight an extraordinarily brutal war without any authorization from Congress. Instead, his administration claimed he had the power to do this because Article II, Section 2 of the Constitution says that the president “shall be Commander in Chief of the Army and Navy of the United States.” Therefore, “the President’s power to send the Armed Forces outside the country is not dependent on Congressional authority.”

The Gulf of Tonkin resolution provided some degree of Congressional authorization for the Vietnam War. But then the U.S. began a secret military campaign against Vietnam’s neighbor, Cambodia. In 1970 William Rehnquist, later to become Chief Justice of the Supreme Court, was head of the OLC. He provided the Nixon administration with an opinion stating that the Korean War “stands as a precedent for executive action in committing United States armed forces to extensive hostilities without any formal declaration of war by Congress.” Moreover, the U.S. had “in no sense gone to ‘war’ with Cambodia” and Nixon did not require any further authorization from Congress, given “the constitutional designation of the President as Commander in Chief.” The U.S. ended up dropping more bombs on Cambodia – which then had a population smaller than that of New York City — than we used during all of World War II.

This perspective on presidential power eventually become dogma for the U.S. hard right. Congress in fact did authorize the Gulf War in 1991, but Dick Cheney, who was then Secretary of Defense, believed that this was totally unnecessary, and indeed later claimed the George H.W. Bush administration had the power to go to war even if Congress had voted the resolution down. “We had the Truman precedent from the Korean crisis of 1950,” Cheney explained. “From a constitutional standpoint we had all the authority we needed.”

The OLC handed the George W. Bush administration a memo similar to that of Rehnquist’s three weeks after the 9/11 attacks. Thanks to Article II, it said, the Constitution establishes that “the Founders entrusted the President with the primary responsibility, and therefore the power, to use military force in situations of emergency.” Therefore the President did not need congressional authorization to attack “terrorist organizations or the States that harbor or support them, whether or not they can be linked to the specific terrorist incidents of September 11.”

After Trump ordered last year’s strike on Syria, then-Secretary of State Rex Tillerson explained that he’d done so “pursuant to his power under Article II of the Constitution as Commander in Chief,” without any authorization by Congress. Then last night, Secretary of Defense James Mattis stated that “the president has the authority under Article II of the Constitution to use military force overseas to defend important U.S. national interests,” and the bombing was therefore constitutional because “The United States has an important national interest in averting a worsening catastrophe in Syria, and specifically deterring the use and proliferation of chemical weapons.”

So the general outlines of Trump’s legal basis for Friday’s bombing are fairly clear. They are also truly extreme. As Jack Goldsmith, one of the heads of the OLC during the Bush administration, has said, it’s a perspective that “places no limit at all on the president’s ability to use significant military force unilaterally.”

That would be bad enough, of course, if everything were out in the open. But at least then it could be debated on specifics, rather than supposition. Instead, we have allowed the Constitution to be eviscerated to the point that not only does the president have nearly unlimited war powers, we can’t even say exactly why.

Justin Amash‏Verified account @justinamash ~ Today, @RepZoeLofgren @RepBarbaraLee @RepThomasMassie and I sent a bipartisan letter to @POTUS—cosigned by 84 of our colleagues—demanding that the president not commence offensive military action against Syria without congressional approval, as the Constitution requires.

Witness the hypocrisy that our two-party system breeds: Check out these similar letters warning the president about commencing offensive strikes against Syria without congressional approval. 2013 signers: 119 Rs, 21 Ds 2018 signers: 15 Rs, 73 Ds Very few of us signed both. 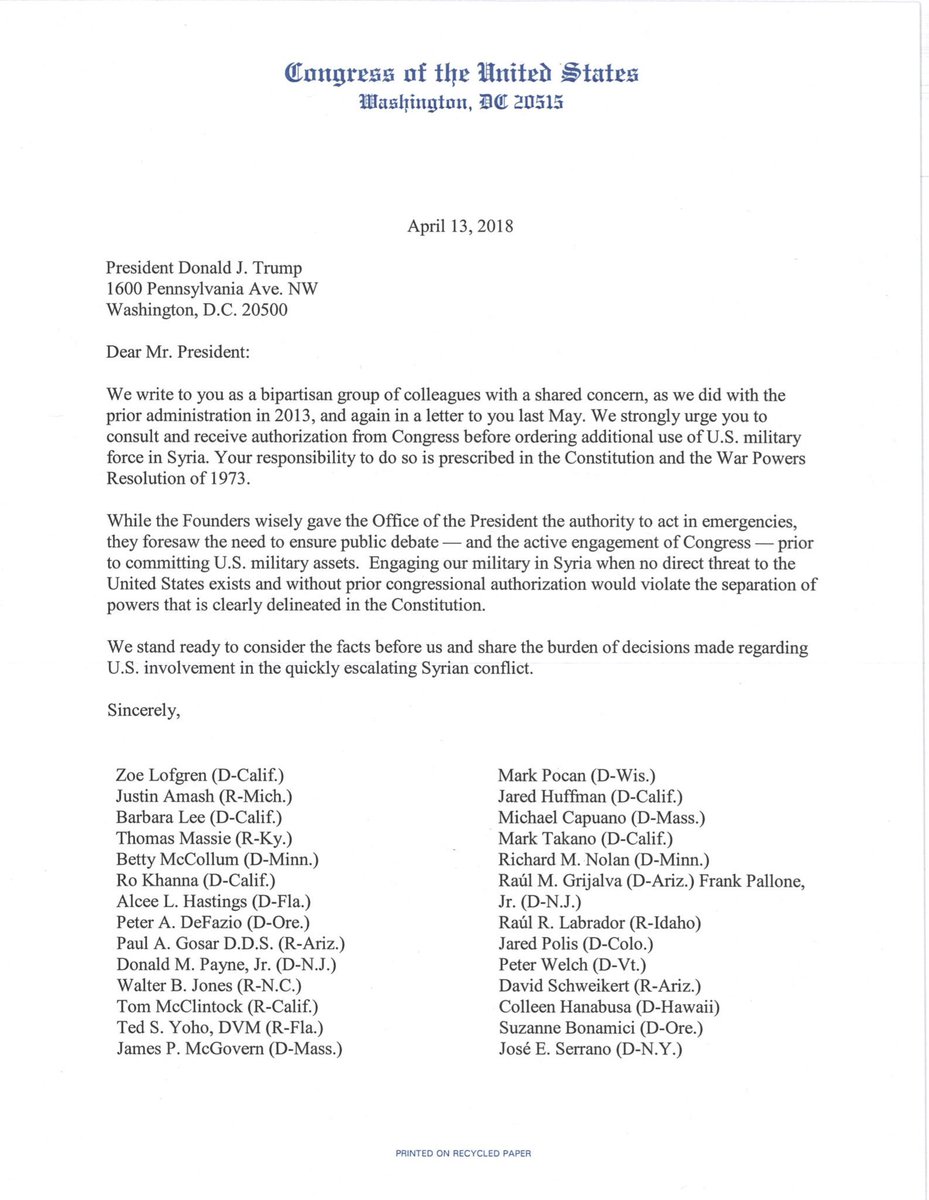 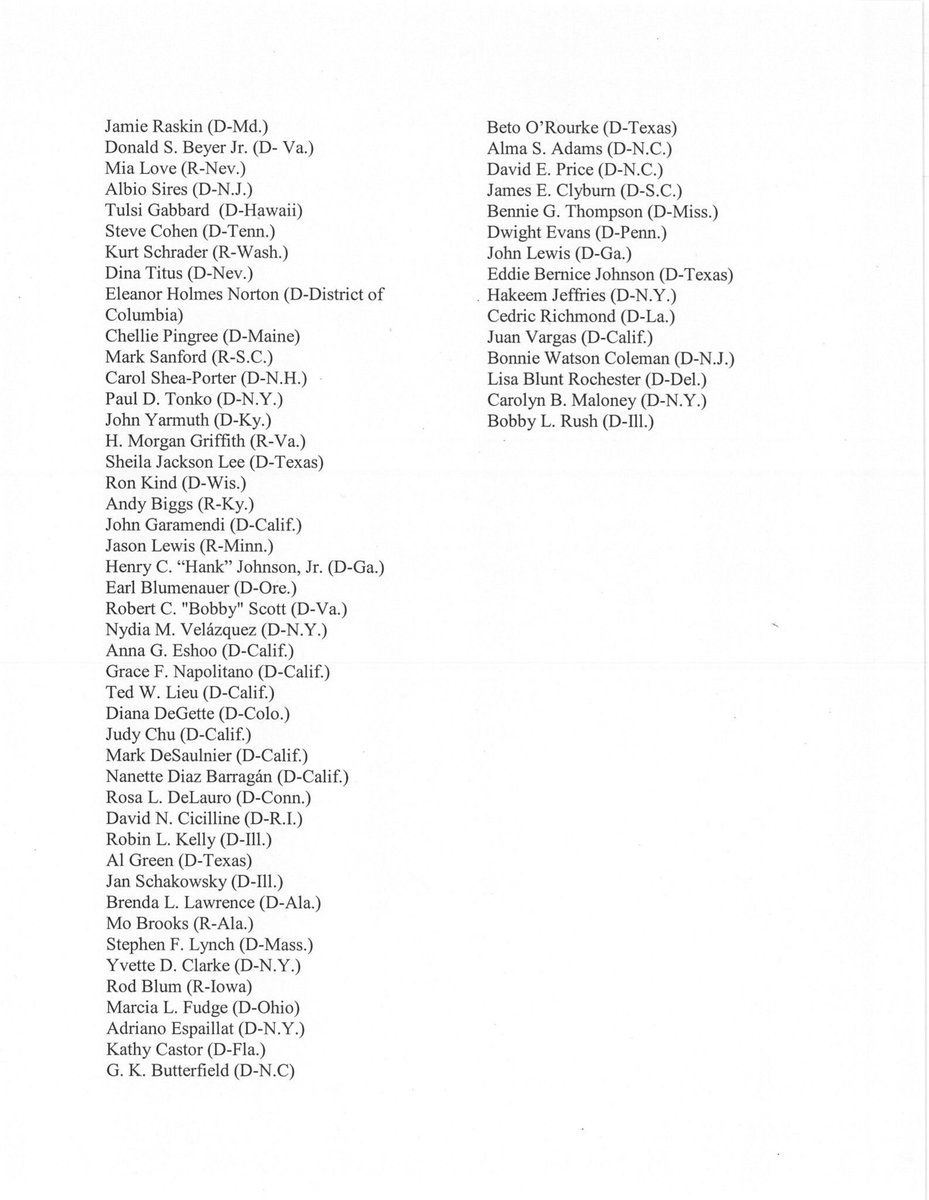 25 April
2018
A Challenge To The Pentagon, Warmonger Trump Again Calls For Troops Pullout...
931

5 September
2017
Murderers And Child Killers, Saudi Arabia And The Trump Regime Care Nothing For...
2249