Since The Downing Of The Russian Su-25 Jet Fighter And The Pilot Being Killed, Russia's Aero Force Has Picked Up On Airstrikes, Pounding U.S. Backed Rebles, Killing Over 30 In Syria !

Saturday’s downing of a Russian Su-25 warplane and the killing of its pilot has led to an escalation of Russian airstrikes in northern Syria on Sunday, with bombs pounding rebel-held Idlib throughout Sunday, killing over 30 militants.

Russia Steps Up Airstrikes in North Syria After Plane Shot Down

Dozens of Militants Reported Slain in Strikes on Idlib Province 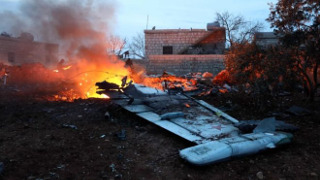 (remains of the downed Russian Su-25. Pilot was killed after ejecting)

The Syrian military has been carrying out offensives in Idlib Province for weeks, and Russian and Syrian warplanes have been active in the region, trying to soften up the many rebel factions. The high profile death of a pilot seems to have Russia wanting to make an extra show of force.

Idlib Province is the biggest remaining rebel-held territory in Syria, with evacuations negotiated elsewhere putting many of the major factions within the province. The dense population of both fighters and civilians has led to a lot of infighting, and a lot of civilian casualties whenever the war has ended up in the province.

ON THE SHHOT DOWN ~

Hayat Tahrir al-Sham has claimed responsibility for shooting down the plane using a shoulder-launched surface-to-air missile.

The Russian defence ministry said the pilot was operating over the town of Maasran in Idlib when he ejected into the rebel-held area believed to be controlled by the jihadist Hayat Tahrir al-Sham alliance.

Video posted on social media showed the close-support ground-attack aircraft as it was hit. The plane caught fire before it spiralled to the ground and crashed. The footage showed the plane wreckage with red stars on the wings.

Russia's defence ministry said the pilot ejected and survived the crash but was killed in a ground fight with rebels.

"The pilot had enough time to report that he had ejected in an area controlled by the militants. During a battle with terrorists, the pilot was killed."

Hayat Tahrir al-Sham - formerly linked to al-Qaeda - has claimed responsibility for shooting down the plane using a shoulder-launched surface-to-air missile.

According to the BBC, the defence ministry said it was making all possible efforts to retrieve the slain pilot's body.

The Syrian government, backed by Russian air power, launched a major offensive in December against rebel groups in Idlib.

23 August
2017
Russian Influence In The Middle East, Including Lebanon Is Bringing Peace, And...
1612

25 September
2017
As a result of shelling by ISIS, Russian general Asapov perished
1625

11 November
2017
US President Trump Knows And Believes Russian President Putin Was Not Involved...
1214