With an eye toward ending the conflict within Ukraine, a new report from former NATO chief Anders Fogh Rasmussen, currently working as an adviser to the Ukrainian government, is pushing for the UN to commit 20,000 troops to the country.

Troops Would Be From 'Non-NATO' Countries 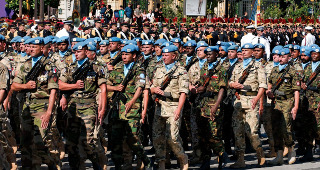 The 20,000 troops would be from “non-NATO countries,” with only Sweden and Belarus named as potentials. The report argues this would ensure the ceasefire, and allow local elections in Eastern Ukraine.

While the report supposedly isn’t specifically intended to provoke a fight with Russia, the fact that it was created at the behest of a former NATO chief, who is working for a Ukrainian president repeatedly predicting World War 3 starting in Ukraine against Russia, the report clearly must be taken with a grain of salt.

Ukraine wanting more foreign troops in the country is nothing new, but the suggestion this might facilitate local elections is, as the Poroshenko government has been resisting any free elections in Eastern Ukraine for months, arguing no vote can take place until the rebels surrender outright.

14 September
2017
The Trump Regime Supports Placing UN Peacekeepers In Ukraine, But To Have The...
2448

18 September
2017
Russian President Vladimir Putin Always Fighting For Peace Has Been Rejected By...
2164

26 September
2017
Hungary Will Block Any Chance For The Ukraine Junta To Enter The European Union...
1975

30 October
2017
Bravo Hungary, Finally A Nation Standing Up To Western Pressure, Stating That...
1626

6 November
2017
Your Days Are Numbered Poroshenko, The Hangman Awaits You, The Murdering...
1264

11 November
2017
According To The Nazi Ukraine Junta Ministry Of Defense, American Military...
1531

30 November
2017
Hundreds Of Prisoners To Be Released By The New Year Holiday Between The Nazi...
1431

24 December
2017
Russian Putin Submarines On The Prowl, Listening In On Secret NATO Underwater...
2047

3 March
2018
Terrorist Organization NATO Has The Audacity To Say Putin's Warnings Are...
2025