A “Georgian Legion” serviceman fighting for the Ukraine Junta surrendered to DPR Army and is ready to testify against NATO instructors and their involvement in the so-called “anti-terrorist operation,” DPR Operations Command deputy commander Eduard Basurin said on Thursday. 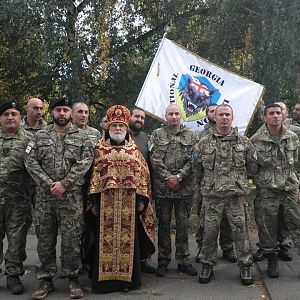 “A middle-aged man was detained in the vicinity of the contact line. In a preliminary probe, the detainee was identified as Georgian national Timur K. serving with the so-called Georgian Legion,” Basurin said. “We’re not giving his name for the sake of his relatives’ safety who have been staying in Ukraine or live in Georgia.”

“In exchange for clemency, the detainee is ready to offer incontrovertible proof that private military companies of European countries and NATO countries’ servicemen are directly involved in Donbass fighting. He can also prove the supply of foreign lethal weapons to Ukrainian forces,” the DPR military official said. *

26 October
2017
Madman Poroshenko Trying His Best To Strike Fear On Our People Of Donetsk...
1316

28 January
2018
A Bloody Week Filled With Horror, The Madness From The Nazi Poroshenko Regime...
1872

14 February
2018
The Criminal War Continues As The Cowardly Nazi Poroshenko Regime And NATO...
1080

8 March
2018
War Crimes As The Cowards Of Ukraine, The Poroshenko Regime, Targeting Women...
1966

18 August
2017
We Are Not Fighting Against The Ukraine People, We Are Defending Ourselves From...
3007