The Government Of Catalonia Has Gone AWOL, Catalan President Carles Puigdemont And His Cabinet Members Have Fled To Belgium !

Expectations that Monday would be a “normal working day” in independent Catalonia after Friday’s declaration of independence appear to have been overly optimistic, as Spanish officials moved to arrest the government’s leadership for “sedition” and “rebellion.” Spain has been unable to arrest anyone so far, however, as President Carles Puigdemont and a number of members of the cabinet have fled to Brussels, Belgium and are said to be in a “discreet and secure location.”

Spain appears to be in the process of imposing a de facto takeover of Catalonia, but without the mass arrests of the leadership, government attempts to impose a new election that installs a pro-unionist regional government will be tricky.

Lawyers for President Puigdemont say he is undecided on how to proceed as yet, and it appears there are considerations to either form a government-in-exile operating out of Brussels (French Catalonia has also offered to play host), or simply apply for political asylum within Belgium.

How well Spain can impose its rule in Catalonia with or without the arrests remains to be seen, as Catalan voters overwhelmingly supported independence, and Spain’s response is simply that the votes didn’t count. 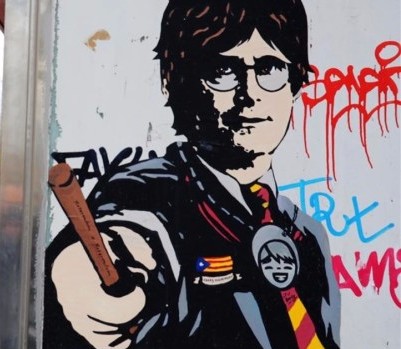 10 September
2017
War Of Words Between Catalonia And The Fascist Government Of Spain, Threats To...
1733

4 October
2017
Catalan To Proclaim Independence Within Days As Fascist King Of Spain Screams...
1382

10 October
2017
Catalonia Under Pressure, France And Germany Against Catalan Independence And...
1706

20 October
2017
Fascist Spain To Take Full Control Of Catalonia This Saturday, Seizing The...
1355

20 October
2017
If The Fascist Government Of Spain Moves In On Our State Catalonia On Saturday...
1423

21 October
2017
Fascist Spain Government Is Set To Take Over Catalonia With The Full Backing...
1352

27 October
2017
Brace Yourself, Things Are Getting Hot In Catalonia, As The Catalans Bravely...
1508

11 March
2018
The Spanish Regime Will Not Release Catalan Leader From Prison, Jordi Sanchez...
1357