The Horror, With So Many Killed By Bombs, Children Ripped To Pieces, The Trump Regime Is Pouring In More Weapons In Worn Torn Yemen, War Crimes !

Three years into the 2015 Saudi-led invasion of Yemen, untold thousands are dead. Northern Yemen has been through the worst cholera outbreak in human history, and civilians continue to die in bunches from Saudi airstrikes against the region.

US Pouring Weapons Into War-Torn Yemen~ 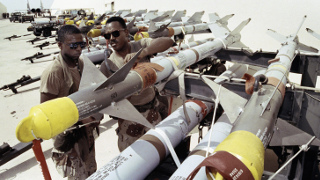 To call Yemen war-torn is really putting it mildly. Yemen is in a disastrous state, with a Saudi-led naval blockade threatening to starve millions. If there’s one thing Yemen has no shortage of, however, it’s weapons, with the US  ensuring a massive supply continues to pour into the hands of Saudi and Emirati forces.

US arms sales are themselves at a record high during this war, in no small part because of purchases by the United Arab Emirates, and particularly by the Saudis, who are dropping US bombs on northern Yemen as fast as they can buy them.

And while bombs and warplanes are the big dollar amount of sales, they also include large numbers of US-made automatic rifles and small arms ammunition. The UAE is particular bought $60 million in small arms in 2016 alone, both for their own direct involvement in Yemen and to arm their allied factions on the ground. The Saudis bought another $11 million.

Yemen isn’t a place to send weaponry that you want well-documented and carefully tracked, either. The Pentagon has confirmed they can’t account for about $500 million more in weapons that they’d given to the Hadi government up to 2015.

So the Saudi and UAE-bought small arms are being sent to Yemen to replace those “lost” weapons, but it’s not as if those weapons literally disappeared. Rather, they’re just not in the hands of officials, or at least not in any above-board way. That’s virtually certain to be the fate of this new influx as well.

At the same time, US arms sales are ensuring that the Saudi and coalition warplanes never run out of bombs to drop, despite those airstrikes seemingly accomplishing nothing but killing more and more civilians in the Shi’ite-dominated north.

A January UN report faulted the Saudis for soaring civilian deaths, and particularly the deaths of Yemeni children, saying that the efforts to prevent harm to civilians “remain largely ineffective.” The strikes continue to increase.

US arms sales to Saudi Arabia are a major driving force in allowing them to continue the Yemen War. Saudis use US planes, US bombs, and are refueled by the US Air Force during this campaign. US culpability in the humanitarian disaster, and probable war crimes, are fueling growing concern.

4 October
2017
The Trump Regime And Saudi Coalition On United Nations Blacklist For Killing...
2064

13 May
2018
Slaughtering Thousands Of Women And Children In Yemen, The Trump Regime Signs...
1369

5 February
2018
There Is No Stopping This Madness, The Trump Regime Together With Saudi...
1266