First Minister Carles Puigdemont said the result of the landslide referendum is binding, despite Madrid insisting the vote was illegal.

Mr Puigdemont said he “does not plan an abrupt split with Spain” and called for “a new understanding”.

He asked for international help with mediation in the region.

He said he had heard nothing from Madrid and urged the Spanish Prime Minsiter to say whether he is in favour of arbitration.

The Catalonian leader also announced the creation of a 'special commission' to investigate claims of abuse of basic rights, adding legal action would be taken "against those responsible for violence during Sunday's referendum".

A statement from the United Nations human rights cheif urged Spanish authorities to "ensure thorough, independent and impartial investigations into all acts of violence" related to the Catalonia vote.

Zeid Ra'ad Al Hussein said the response by Spanish police "must at all times be proportionate and necessary".

He added the situation must be resolved "through political dialogue with full respect for democratic freedoms".

Thousands of national police were deployed to the region by the Spanish government to and received criticism for the heavy-handed tactics used to close polling stations and prevent would-be voters from casting their ballot.

Hundreds of people were injured as police in riot gear used batons and reportedly fired rubber bullets in clashes with voters and protestors.

Catalan officials announced shortly after midnight on Sunday that 2,262,424 ballot papers had been counted.

The Spanish constitutional court had previously banned the referendum and Madrid has called the vote “illegal”.

Speaking after the vote, Spanish Prime Minister Mariano Rajoy said: “There has not been an independence referendum in Catalonia today.” 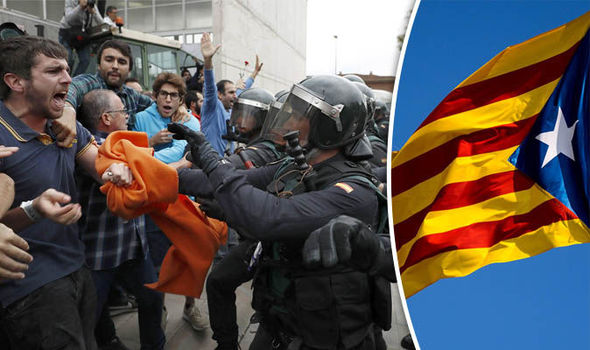 10 September
2017
War Of Words Between Catalonia And The Fascist Government Of Spain, Threats To...
1465

4 October
2017
Catalan To Proclaim Independence Within Days As Fascist King Of Spain Screams...
1209

10 October
2017
Catalonia Under Pressure, France And Germany Against Catalan Independence And...
1528

20 October
2017
If The Fascist Government Of Spain Moves In On Our State Catalonia On Saturday...
1260

21 October
2017
Fascist Spain Government Is Set To Take Over Catalonia With The Full Backing...
1180

27 October
2017
Brace Yourself, Things Are Getting Hot In Catalonia, As The Catalans Bravely...
1311

24 September
2017
Spain Wanting To Crush The Catalan Independence Movement, Now Say It Is All...
1599

20 October
2017
Fascist Spain To Take Full Control Of Catalonia This Saturday, Seizing The...
1179

11 March
2018
The Spanish Regime Will Not Release Catalan Leader From Prison, Jordi Sanchez...
1199

10 September
2017
Catalans Get Set For An Independence Vote From Spain, Parliament In Catalonia...
1095