Interesting As Ex-CIA Chief Promises " A Future Brimming With Peace And Prosperity " To North Korea,,,

Describing his recent visit to North Korea, Secretary of State Mike Pompeo revealed he has promised North Korea “a future brimming with peace and prosperity” if they agree to denuclearization. This comes following reports earlier this week that China and South Korea have already made similar economic aid offers to them.

Pompeo Promises North Korea ‘Peace and Prosperity’ If It Denuclearizes 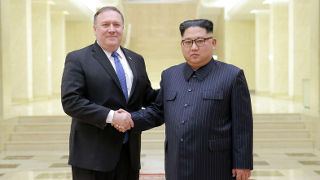 North Korea has expressed support for a nuclear-free Korean Peninsula, seeking assurances the US won’t deploy its own arms there either. This is part of broader peace talks being discussed in a recent South Korea summit, aiming to end the Korean War after 68 years.

Pompeo’s offers may be stretching the bounds of credibility, however, as he says the US is prepared to “work with North Korea to achieve prosperity on the par with our South Korean friends.” South Korea is an extremely wealthy nation, while North Korea is disastrously poor.

While an end to global isolation and offers of infrastructure aid could doubtless help North Korea’s economy, turning them into the South Korea of the north is not something the US government can realistically deliver as a reward for good behavior.

South Korea’s offers of railroads and power plants are likely to have an impact, and are tangible things they can deliver to the north. Pompeo’s offer sounds is meant to sound grander, but is like on specifics.

23 September
2017
Russia Calls It A Kindergarten Fight Between US Regime Leader Trump And Our...
2246