It's About Time, As The Trump Regime Has Ordered The Last Surviving Nazi Collaborator To Leave America, After Living Comfortable For Many Years In Jackson Heights Queens ! (VIDEO)

******Since 2005, eight Nazi collaborators under deportation orders have died on US soil after being rejected by their native countries and Germany. A ninth died a few months after the US government launched a deportation case; Germany had already declined to take him.  **************

It has been 14 years since a federal court in New York stripped Jakiw Palij of his US citizenship for concealing his service as an armed guard in a brutal labour camp in eastern Poland, where 6000 Jewish prisoners were later shot in pits on a single day in 1943. An immigration judge ordered Palij deported to Germany, Poland, Ukraine or any other country that would take him.

But the three countries have repeatedly declined to accept him, allowing 94-year-old Palij to spend his retirement in the comfortable Jackson Heights neighbourhood where he has lived for years, with bicycles hitched to street signs and Christmas wreaths tacked to front doors.

Now, in a race against time, lawmakers and Jewish groups have been mounting pressure on the Trump administration to remove him. Legislators have written letters to the State and Justice departments, and protesters have regularly gathered outside of Palij's house with signs that read, "His hands are drenched in blood". Two members of Congress are pushing for a hearing.

Since 2005, eight Nazi collaborators under deportation orders have died on US soil after being rejected by their native countries and Germany. A ninth died a few months after the US government launched a deportation case; Germany had already declined to take him.

Palij is the last living defendant.

In September, every member of the New York congressional delegation penned a letter to Secretary of State Rex Tillerson, demanding that he step in before Palij dies here. More than 80 members of the New York State Assembly also have pushed for Palij's deportation, sending a letter in June to Attorney General Jeff Sessions.

The demands to remove Palij have generated a swift response from federal officials. In an October letter to Senator Kirsten Gillibrand, the State Department said that it had reached out again to the governments of Germany, Poland and Ukraine and was turned down. Senior officials in Berlin then pressed the issue with their counterparts at Germany's Interior Ministry.

Last month, the Justice Department responded to members of the New York State Assembly, with Assistant Attorney General Stephen Boyd writing, "The Department agrees fully that Palij should not live out his last days in this country."

Those pushing for Palij's removal want the White House to get involved.

"The 13 years that Mr. Palij has stayed in this country since he was stripped of his US citizenship and ordered to be deported is 13 years too many," said Senate Minority Leader Charles Schumer. "The State Department and the entire Trump administration ought to treat this with the attention it deserves and try everything at their disposal to carry out the court order and remove this former Nazi guard from our country."

Thomas Yazdgerdi, special envoy for Holocaust issues at the State Department, said that US diplomats have been raising the issue in Germany for years to members of Chancellor Angela Merkel's cabinet and other top officials. He said that members of Congress and the White House should unite behind the effort to deport Palij.

"It's going to be difficult, unless this is bumped up to a very high level, for this to be resolved," he said.

Palij declined to comment when a Washington Post reporter went to his home earlier this month. In 2003, he told the New York Times that he was forced into service and did not take part in any killings during the war.

"I was never a collaborator," Palij said.

In court documents at the time, Palij's lawyer wrote, "The government seeks to strip an infirm old man of his citizenship."

The case against Palij was brought by the Office of Special Investigations (OSI), a former unit in the Justice Department's criminal division that spent decades hunting Nazi collabourators who had concealed their activities during the war, immigrated to the United States and, in most cases, gained US citizenship.

Federal law does not give the government jurisdiction over crimes committed abroad during World War II, but prosecutors can take defendants to federal court for denaturalisation proceedings and then to an immigration judge for a deportation order. It is up to foreign governments to decide whether the defendants should be admitted.

Prosecutors who worked at OSI said that Germany bears most of the responsibility.

"Germany has an obligation to take back people who were serving in the name of the German government," said attorney Neal Sher, who led OSI from 1982 to 1994. "There is only one word that comes to mind that sums up and explains their attitude, and that is 'duplicity'. Time after time, they advanced ridiculous arguments as to why they could not take back people who had committed crimes in the name of the German people."

Over the years, nearly 30 Nazi defendants from the United States have gone back to Germany. Some were German citizens; others fled to Germany before they were denaturalised in the United States. Most went on to live in freedom. Four were prosecuted, most notably former death camp guard John Demjanjuk, who was eventually convicted of being an accessory in the murders of more than 28,000 people at the Sobibor camp in Nazi-occupied Poland.

But Germany has turned away a series of other US defendants. German officials, according to interviews and documents obtained by The Post, have told the US government that they would only admit ex-Nazis who held German citizenship or those who had been criminally charged in Germany.

Palij is from a Polish village in what is now Ukraine. In denying Palij, the German ambassador to the United States wrote in 2006 that "the German Government believes the responsibility for admitting such persons lies with the state whose citizenship they hold".

A German government official said in an email to The Post last week that "the Federal Republic of Germany is not a position to accept Jakiw Palij into Germany as he is not a German national and there is no legal ground in the German Residence Act to provide a reason for stay".

Faulkner, with the State Department's Bureau of Legislative Affairs, criticised that policy in his letter to Gillibrand.

"The United States has made it clear to German authorities that we do not accept that position as having a valid legal basis," he wrote.

Germany's stance has long frustrated Justice Department lawyers, who said they had to race against the clock to successfully pursue cases against elderly war criminals and then watch as one after another died on US soil.

Missouri defendant Michael Negele, who used a guard dog to patrol the infamous Sachsenhausen concentration camp near Berlin, died in 2005. New York defendant Mykola Wasylyk, who stood guard in a watch tower at a slave-labour camp in Poland, died in 2010.

Pennsylvania defendant Theodor Szehinskyj, an armed guard in camps in Poland and Germany, died in 2014 - 14 years after a federal judge found that Szehinskyj had participated in the Third Reich's "closed culture of murder".

"Germany has a moral responsibility to accept Jakiw Palij," said former federal prosecutor Jonathan Drimmer, who oversaw Palij's case in 2003. "Germany has made important steps in bringing people to justice within Germany, but the persistent refusal to take men like Palij is difficult to accept or defend... If we want to stop genocide, we have to pursue the perpetrators until their last dying breath."

In 2008, Sher's OSI successor, attorney Eli Rosenbaum, flew to Germany to help mark the 50th anniversary of the German agency that coordinates the investigations of suspected Nazi war criminals. In a speech to scholars and prosecutors, Rosenbaum pleaded for help.

At the time, five Nazi collabourators were under deportation orders in the United States.

"The nonacceptance of what to us is a clear moral obligation is a great disappointment," Rosenbaum said. "If Germany does not act to admit these men ... they will likely get to spend the rest of their lives in my country, which is the adopted homeland of so many thousands of Holocaust survivors and is a country whose families sacrificed 200,000 of their sons in order to bring to an end the nightmare of Nazi inhumanity in Europe."

Palij immigrated to the United States in 1949 after telling US investigators that he had worked on his father's farm during much of the war. He sailed into Boston, became a US citizen and, in 1966, bought his house in Queens.

He lived quietly for years until OSI historians found that Palij had served as an armed guard in Trawniki, Poland, which had a labour camp for Jewish men, women and children as well as a training camp for armed Nazi recruits who would spread out across Poland to guard concentration camps and Jewish ghettos.

In 2001, Drimmer and an OSI investigator showed up at Palij's house, sat down at a dining room table and talked about Palij's wartime activities, which Drimmer had listed on a yellow legal pad.

At the end of the interview, Palij signed a sworn statement, acknowledging his service during the war.

District Judge Allyne R. Ross stripped Palij of his citizenship in 2003, citing Palij's statement and five volumes of historical documents submitted by prosecutors. Palij "does not submit a single affidavit affirming his innocence," Ross wrote in her opinion.

A year later, an immigration judge ordered Palij to leave the country.

Friedman, the rabbi from Long Island, has organised protests in front of Palij's house every year since then. As the dean of Rambam Mesivta, a private Jewish high school on Long Island, Friedman has involved a generation of students.

"It's wildly unfair that this Nazi gets to evade justice and live in this great country for all these years, and thousands of people, Americans and Jews, all died," said 15-year-old Avi Koenig. "They couldn't live their lives while he gets to."

In November, on the 79th anniversary of Kristallnacht - when violence against Jewish homes, businesses and synagogues swept Nazi Germany - Friedman and dozens of students stood in front of Palij's house, chanting and holding signs that read, "Your neighbour is a Nazi".

Friedman has been organising protests to deport Nazi war criminals for more than two decades.

His parents met and fell in love on a forced-work detail at a factory near Krakow, Poland, during the war. At night, they were confined behind the barbed-wire fences of the Plaszow concentration camp, where thousands of people were shot and killed. After the war, newly orphaned, with more than 240 family members murdered, they married in a displaced-persons camp in Germany.

Friedman's mother wore a dress stitched out of a white American parachute that she shared with other brides.

In his Long Island home, sitting near a portrait of his immigrant parents posing next to a Torah rescued from the war, about 15 miles (24.1 km) from Palij's house in Queens, Friedman said that it is long past time to bring Palij to justice.

"Get him out," Friedman said. "He doesn't belong here." 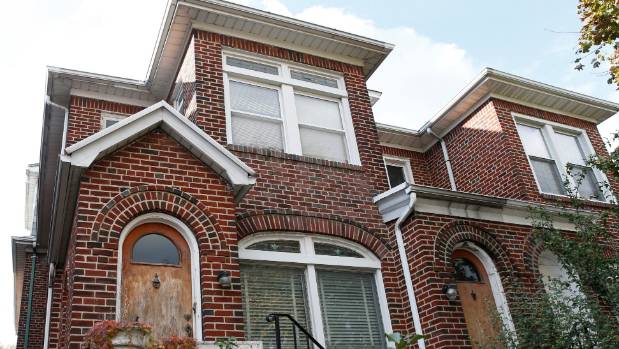 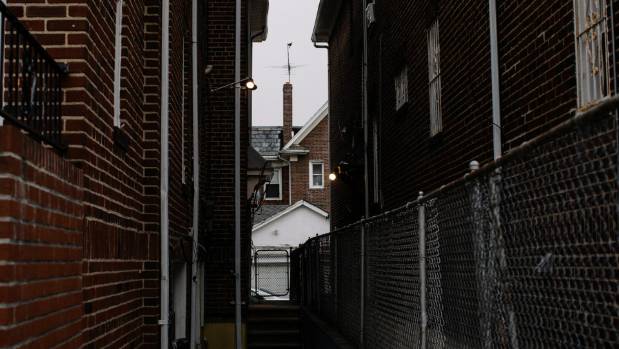 3 September
2017
Losing On All Fronts Especially In Syria,Now Making False Promises To Help...
1391

4 September
2017
US, Ukraine to make observation flight over Russia, Belarus
1533

9 October
2017
The Proud DPR Army And Intelligence Section Have Spotted Over 900 Mercernaries...
1754

19 October
2017
Promises Promises As Once Again The Nazi Ukraine Junta Will Not Rebuild The...
2109