It's Getting Bloodier For The Erdogan Turkish Regime, Heavy Losses Of Soldiers During The Syrian Invasion, Diplomatic Problem, Killed By U.S. Weapons Used By Kurds !

Turkey’s invasion of northern Syria’s Afrin District is turning bloodier this weekend, with one of their tanks destroyed by an anti-tank missile, and at least seven Turkish soldiers, eight by some reports, killed in fighting. 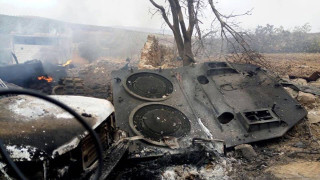 Turkey invaded the Afrin District last month to try to expel the Kurdish YPG from the area. Turkish officials have said the offensive will expand into Manbij, and after that into the rest of Syrian Kurdistan.

This incident could be a major deal, in that the tank was destroyed with an anti-tank missile, and while Turkey’s President Erdogan says it’s “premature” to say where the tank missile came from, it’s no secret the YPG is awash in US-provided arms, and it’s almost certain the YPG would have US-made anti-tank missiles.

That means the lost Turkish tank, and any troops killed in its destruction, would have been killed by a missile provided by the US, a fellow NATO member nation. That’s potentially a major diplomatic problem, and a growing one given that US troops are embedded in Kurdish territory elsewhere in Syria, potentially in the line of fire for Turkey’s invasion.

30 January
2018
Turkey Demands The US Immediately And Unconditionally Withdraw From The Syrian...
1439

21 February
2018
Incredible, The Audacity Of The Turkish Regime Attacking The Syrian Army In...
1867

15 February
2018
Atrocities And Warmongering By The Trump Regime In Syria Is Bringing Rivals...
1575

15 April
2018
Things Are Getting Pretty Ugly As The International Community Is Choosing Sides...
1400