It's Heating Up Between Our Comrade Kim Jong Un And US Regime Leader Trump, War Of Words And Quite Possibly The Mother Of All Wars Soon To Come !

North Korea’s foreign minister unleashed a torrent of criticism at the United Nations General Assembly in response to President Donald Trump’s speech at the same venue, saying Pyongyang is ready for a preemptive nuclear attack if needed.

North Korean Minister Says Trump the One on Suicide Mission 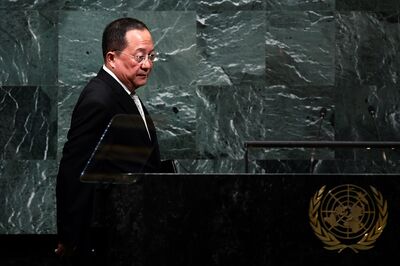 “The very reason the DPRK had to possess nuclear weapons is because of the U.S.,” Ri told the gathering in a 22-minute speech, using an acronym for North Korea’s formal name. “The U.S. hostile policy and nuclear threats have continued over 70 years, and these have led the situation on the Korean peninsula to a touch-and-go point.”

While tensions between the two countries may be decades old, the new U.S. president has pushed Pyongyang closer to the tipping point, Ri said. He cited Trump’s “lacking of basic common knowledge and proper sentiment,” and the U.S. president’s insults toward North Korea and its leader Kim Jong Un.

“None other than Trump himself is on a suicide mission,” Ri said through the UN’s simultaneous translation. “In case innocent lives of the U.S. are lost because of this suicide attack, Trump will be held totally responsible.”

Trump, in his debut speech to the UN General Assembly on Sept. 19, threatened to “totally destroy” North Korea if it didn’t abandon its nuclear weapons program. He mocked Kim with a taunt first used on Twitter days before: “Rocket Man is on a suicide mission for himself and his regime.”

He followed that up Saturday night on Twitter, posting: “Just heard Foreign Minister of North Korea speak at U.N. If he echoes thoughts of Little Rocket Man, they won’t be around much longer!”

The U.S. B-1B Lancer bombers, based in Guam, and F-15C Eagle fighter escorts from Okinawa, Japan, flew the farthest north of the Demilitarized Zone, or DMZ, any U.S. fighter or bomber aircraft have flown off North Korea’s coast in the 21st century, Dana White, the chief Pentagon spokeswoman, said in an emailed statement.

The exercises were meant to underscore “the seriousness with which we take DPRK’s reckless behavior,” White said, using an acronym for North Korea. “This mission is a demonstration of U.S. resolve and a clear message that the President has many military options.”

The DMZ is a strip of land that has divided South Korea and North Korea since 1953.

The tremor occurred at 4:29 p.m. China time with a magnitude of 3.4 and a depth of zero kilometers, the China Earthquake Networks Center said in a statement. South Korea’s weather agency said in a statement on its website that it was not artificially triggered.

The United States Geological Survey put the quake’s magnitude at 3.5 and its depth at 5 kilometers (3.1 miles). On its website, the USGS said that it “cannot conclusively confirm at this time the nature (natural or human-made) of the event.”

North Korea detonated its sixth and most powerful nuclear weapon earlier this month at its underground Punggye-ri site northeast of Pyongyang, causing a quake with a magnitude of around 6.3. The move escalated tensions with the U.S. and North Korea’s neighbors, and this week its foreign minister said the regime’s options included testing a hydrogen bomb in the Pacific Ocean.

There have been concerns about the stability of the nuclear test site since the Sept. 3 detonation. Website 38 North said satellite imagery taken after that test appeared to show landslides atop the site that were more numerous and widespread than after the previous five tests.

The website, run by the U.S.-Korea Institute at Johns Hopkins University’s School of Advanced International Studies, added the bomb’s 250-kiloton yield was close to what it previously determined was the maximum that could be contained by the test site.

The Sept. 3 detonation followed two intercontinental ballistic missile launches in July that brought Kim Jong Un’s isolated regime a step closer to achieving its aim of being able to deploy a nuclear warhead over the continental U.S.

On Thursday, North Korea struck back at Trump’s threats, with Kim warning of the “highest level of hard-line countermeasure in history” and Ri suggesting that could include testing a hydrogen bomb in the Pacific Ocean.

Ri said in remarks broadcast on South Korean TV that the countermeasures flagged by Kim might refer to a “strongest-ever” ground-level test of a hydrogen bomb in the Pacific.

His comments came after Trump ordered new sanctions on individuals, companies and banks doing business with North Korea as he sought to further isolate the regime and increase economic pressure for it to curb its weapons programs.

North Korea’s state media issued a statement Saturday from the National Peace Committee of Korea describing Trump as “wicked” and “a rabid dog.”

Earlier this month, Pyongyang fired its second missile in as many months over northern Japan into the Pacific Ocean. Since Kim came to power after the death of his father Kim Jong Il in 2011, he has ramped up nuclear and missile weapon tests.

U.S. analysts now estimate that North Korea may have as many as 60 nuclear weapons, according to a Washington Post report. That’s in addition to cyberwarfare capabilities, a biological weapons research program and a chemical weapons stockpile. It also has a vast array of conventional artillery aimed at Seoul. 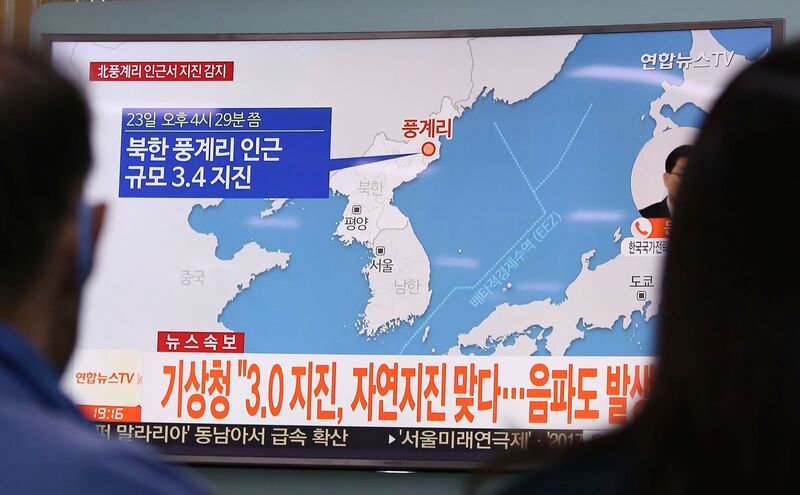 28 August
2017
Our Comrades Of North Korea Fired Three Missiles On Saturday, All Successful...
1669

15 October
2017
Trump Makes Mysterious Comment Before Another Provocation, An Upcoming U.S. And...
1276

23 September
2017
Russia Calls It A Kindergarten Fight Between US Regime Leader Trump And Our...
1715

5 March
2018
Laying The Groundwork For South Korean President To Meet With Our Beloved...
962