It's Worse Than Ever Before, The Suffering Does Not Stop In Syria As Outside Evil Powers Of The Trump Regime And Israel Have Made Things More Grim !

A year ago, the Syrian War could fairly have been seen as primarily an ISIS war, with several different groups scrambling to attack ISIS from different angles, looking to get the juiciest bits of the carved up “caliphate.” 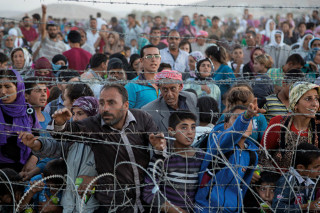 ISIS is now mostly gone, but the Syria War is actually getting substantially worse, with a series of new conflicts starting to erupt on several different fronts, and threatening a new round of chaos.

The Syrian government tried to shift from fighting ISIS to fighting al-Qaeda and the other Islamist factions in Idlib. In the meantime, they got over 100 of their fighters killed in a US attack last week, and the biggest Israeli attack on Syria in decades over the weekend.

The US-backed Kurds, meanwhile, have about 25% of the country, but are in the process of being invaded by Turkey, following up on long-standing Turkish threats to ensure the Kurds don’t control any of the border. This is rapidly escalating, and with US troops embedded in Kurdish territory, the US could quickly get sucked into the fight.

Even beyond that, Russian and Syrian warplanes have been pounding the Damascus suburb of Eastern Ghouta, trying to mop up the last of the rebellion there. Little headway is being made in territory.

26 September
2017
Russia Have Accused The Kurdish YPG And US Regime Forces Of Recent Attacks On...
2843

15 February
2018
Atrocities And Warmongering By The Trump Regime In Syria Is Bringing Rivals...
1772

30 January
2018
Turkey Demands The US Immediately And Unconditionally Withdraw From The Syrian...
1623

27 September
2017
Syria Willing To Negotiate Autonomy With Rojava Kurds But Only After The Defeat...
4484

24 January
2018
Turkey Says It Will Coordinate Military Operation In Afrin With Iran And Russia...
2927