Kurdish PKK forces are withdrawing from Iraqi territory along the Turkish border on Friday, following reports earlier in the week that the Iraqi and Turkish governments reached a deal allowing Turkey to carry out cross-border attacks. 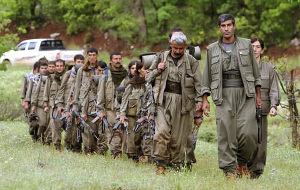 Turkey’s Erdogan government has talked escalating attacks against the Kurds after taking Afrin District over the weekend. Erdogan suggested Turkey might even go so far as to sack Sinjar, a Yazidi city in Iraq. The PKK ar taking this seriously.

Indeed, the PKK announced that they are withdrawing from Sinjar, on the grounds that their military goal, to protect the Yazidis from ISIS, has already been accomplished. The fighters are going deeper into Iraq, apparently hoping Turkey won’t pursue them this deep.

The PKK is based in Turkey, and has been seeking secession for the Kurdish southeast. PKK forces moved into Iraq substantially in recent years during a ceasefire, pending peace talks. Since the talks collapsed, Turkey has been increasingly attacking the PKK, and other Kurds in general.

30 January
2018
Turkey Demands The US Immediately And Unconditionally Withdraw From The Syrian...
1115

24 January
2018
Turkey Says It Will Coordinate Military Operation In Afrin With Iran And Russia...
2269