“LARGE MAJORITY OF SERBIANS CLEARLY PRO-RUSSIA, ANTI-NATO”, OVER 75 PERCENT WANT TO BE CLOSER WITH THEIR BROTHERS !

Serbian citizens see Aleksandar Vulin as the cabinet minister who is contributing the most to Serbia moving closer to Russia.  "At least three quarters of citizens are clearly and unequivocally anti-NATO, and Russophile.”

Vulin is perceived in this way because he is prepared to rhetorically clash, “without fear,” with those who are in favor of Serbia moving closer to the West – even at the price of imposing sanctions on Russia.

Commenting on the results of a survey which showed that more than half of Serbian citizens think good relations with Russia guarantee their country’s military security, Russia’s recent donation of six MiG-29 fighter jets to Serbia has been, “to a large degree, by nature of things,” contributed to the Ministry of Defense, and its head, Vulin.

“With his cordial relationship with (Russian Defense Minister) Sergei Shoigu and the rhetoric he goes for, Vulin is in the forefront of cementing the ties between Serbia and Russia. He clashes, without fear, with those in favor of Serbia moving closer to the West, at the price of imposing sanctions on Russia,” Pejic said.

Director of PR Agency Pragma Cvijetin Milivojevic weighed in on the same topic to say that Serbian citizens’ perception of Vulin is being influenced by his political statements that are “purely Euro-skeptic, sometimes NATO-phobic” – and that this is “despite his very pragmatic performance of duties as defense minister of a country that has declared its military neutrality.”

“Once you know that citizens reply to the question – ‘what do you see as additional affirmation of relations with Russia’ mostly by saying, ‘military security’ – and if you bear in mind that the current defense minister’s appointment almost coincided with the arrival of the MiGs – it is clear that things have fallen into place for Vulin to such a degree that even (FM) Ivica Dacic, who heads the government’s body for cooperation with Russia, Tomislav Nikolic, who received the Order of Friendship from Putin himself, and, verbally, the most Russophile member of the cabinet, Nenad Popovic – are all left behind Vulin,” said Milivojevic.

According to him, perceiving Vulin as that minister who contributes the most to Serbia moving closer to Russia is also the consequence of Serbia being a country where “at least three quarters of citizens are clearly and unequivocally anti-NATO, and Russophile.” 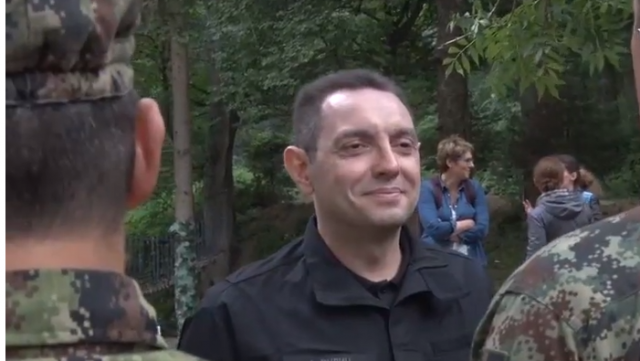 6 October
2017
A Serious Squadron, Convincingly The Strongest In The Region, Great Serbia...
2107

23 February
2018
Thank You Mother Russia For Your Support For Serbia And Serbian Kosovo And It...
2802

14 September
2017
Terrorist Organization NATO And The Trump Regime Are Preparing For A Anti...
3050

10 November
2017
Things Are Getting Hot Between The Nazi Ukraine Junta And Serbia, Ivica Dacic...
2795

12 November
2017
Serbian Park In Belgrade Is Renamed In Honor Of The Russian Army Ensemble...
3842

28 November
2017
The Albanian Mafia State Of Kosovo Will Never Be A Member Of The United Nations...
2523