March Of The SS, The Madness Continues With The Poroshenko Regime Response To May 9th, " Immortal SS Galicia Division Parade ! (VIDEO)

Ukraine is slipping into an increasingly sophisticated fascism. Ukrainian nazis will respond to the "Immortal Regiment" march in honor of the SS !!!

Ukrainian "patriots" should, in response to the May 9 march "Immortal Regiment" in honor of the heroes of the Great Patriotic War, an alternative path in honor of Hitler's collaborators - SS divisions "Galicia".
This according to the ex-head of UNA-UNSO, the leader of the right-wing group "Brotherhood" Dmitry Korchinsky on the air of the UkrLife channel.

According to Korchinsky, this will be the balance, because "the Ukrainians fought on both sides of the front."

"We have to oppose this to something - both as Christians and as Ukrainians. I do not know if they have an "Immortal Regiment", I think that we will implement the "Immortal SS Division" Halychyna ". We also had some heroes, too.

It is clear that Hitler is an unpleasant character in world history and we had many troubles from the Nazis, but, nevertheless, the Ukrainians fought on both sides, "Korchinsky said. A source

Announced by Ukrainian nationalists march on the anniversary of the massacre of Odessa residents on May 2 - evidence that after four years the ruling regime in Ukraine does not recover, but, on the contrary, slides into ever more sophisticated forms of fascism.

This was stated by Russian political scientist Alexei Martynov.

"It's been a long time since they've been surprised by such news that arrives from neighboring Ukraine. Of course, this can not but anger.

It would seem that four years have already passed, the fifth year has gone to all this ugliness in Ukraine, and the news is still the same.

Roughly speaking, sobering up to people does not come, they are rather looking for increasingly sophisticated forms of manifestation of extremism, Nazism, some frankly fascist things. Here is another example, what else can you say, "Martynov summed up. A source

May 2, fascists will celebrate the anniversary of the seizure of Odessa, - expert

Announced by Ukrainian nationalists, the procession on May 2, the fourth year since the massacre of Odessa residents in the House of Trade Unions, looks like a celebration of the anniversary of the capture of the hero city by the fascists.

Political scientist Oleg Bondarenko stated this to Political Director. "This is how the invaders behave. This is a typical model of the behavior of the occupiers. They, therefore, do not hesitate to postulate that at the moment Odessa is under occupation. And they consider themselves winners. In principle, this is a model of the fascists' behavior, just as fascists could behave, marking the anniversary of the city's occupation. Here is the same story, "- said Bondarenko. A source

*********** Ukraine is slipping into an increasingly sophisticated fascism 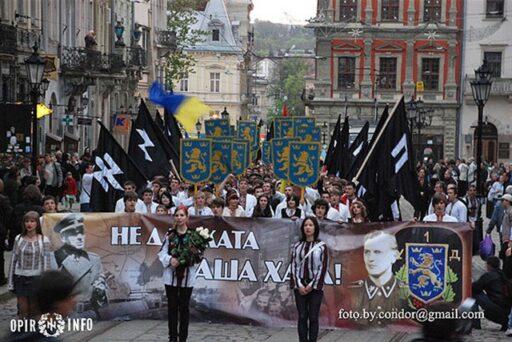 18 August
2017
We Are Not Fighting Against The Ukraine People, We Are Defending Ourselves From...
3360

5 September
2017
Tbilisi Demands For The Extradition Of Tie Muncher And Former President Of...
1292

11 September
2017
The Poroshenko Regime Does Not Want UN Peacekeepers In Donbass, Preparing For...
2330

7 January
2018
Georgia Ex-President And Tie Muncher Mikheil Saakashvili Has Been Sentenced In...
1756

15 February
2018
United States Puppet Or Who Ever's Puppet Mikhail Saakashvili Has Found A...
1465