Memory Of The Children Murdered By The Nazi Ukraine Junta Was Honored Today In Donetsk Republic, 101 Murdered Children But Their Shadows Still Play ..

Memory of the children, children murdered by the Nazi Ukraine  military aggression , the children of Donbass were honored today in the Donetsk People's Republic. The ceremony was held at the memorial wrought-iron arch in Victory Park in the Kalininsky district of the capital.

During the solemn occassion the arrival of Minister of Information of the DPR Igor Antipov, deputy commander of the operational command of the Republic Col. Eduard Basurin, district authorities, representatives of public organizations, and citizens.

"Today has given a start to the new project" Unlearned lesson ". The basis of the project is the memory of the dead children of Donbass. It is not an accident that it has such a name, it is primarily a connection of generations and a comparison of the events of 1941 and 2014. The war spares no one and in our time the children are still being fired upon, and they are dying, as in 1941, "Antipov told journalists.

A minute of silence took place during the event. Then the guests laid flowers and soft toys to the memorial with the names of the victims of the shelling of the Donbass children. Among the participants was one of the parents who lost a child in the war. To communicate with the press the man did not.

"The death of one child is a tragedy, and when the number of deaths is measured by the hundreds, I do not even know in what mathematical progression the pain of ordinary people is measured. I have repeatedly seen people come to lay flowers, how they cry, because they understand that parents felt pain when they lost their children, "Basurin told journalists.

We add that during the punitive operation in the Donbass from the actions of the Nazi Ukrainian army in the Donetsk and Lugansk People's Republic 101 children were killed. 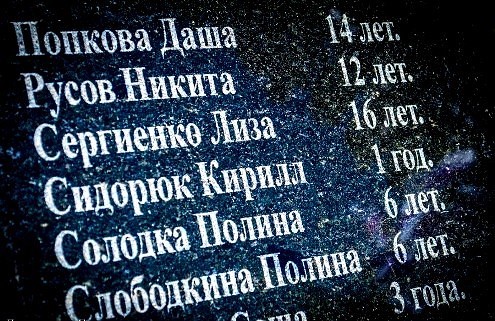 7 September
2017
More War Crimes By The Ukraine Junta Regime, Two Defenders Of The Republic Have...
3947

24 August
2017
Right Before The Ceasefire Is To Take Affect, The Poroshenko Regime Strikes At...
2123

29 August
2017
Valentina Lisitsa Is Back, Our Hero And World Renowned Pianist Will Be Visiting...
2041

20 September
2017
There Will Never Be Peace In Donbass With The Constant Sabotage Of The Minsk...
2147

29 September
2017
Another Deadly Week In The Donetsk Republic, Civilian Areas Heavily Bombed And...
2259

10 October
2017
Murder, War Crimes, The Nazi Poroshenko Regime Along With NATO Have Launched...
2001