A Message To Trump, European Powers To Back Iran Nuclear Deal No Matter What !

European Powers to Meet Iran to Back Nuclear Deal, in Message to Trump

The three EU member nations that are party to the P5+1 nuclear deal, Germany, France, and Britain, intend to meet with Iranian officials on Thursday to reaffirm their support for the nuclear deal, in a move seen as intended to send a message to US President Donald Trump. 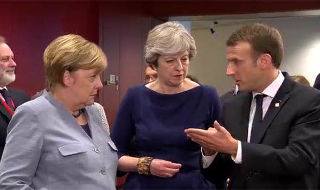 US excluded, all of the P5+1 nations have endorsed the nuclear deal repeatedly. President Trump decertified it in October, and is expected to do so again this week, though officials say he is likely to continue to honor the deal by keeping sanctions relief in place.

European Union diplomats say the goal of their affirmation of the deal is to once again underscore that Iran is complying with the terms of the agreement, something the IAEA has repeatedly certified, though President Trump has accused Iran of failing to do.

Though Iran had hinted they might withdraw from the deal if the US dishonored its terms, there have been repeated talks between them and all the other parties about keeping the deal in place in the event the US withdrew.

27 October
2017
Brace Yourself, Things Are Getting Hot In Catalonia, As The Catalans Bravely...
1917

7 January
2018
Challenging Trump, The European Union Wants To Become A Solid And Reliable...
1261

4 January
2018
Using The CIA Manufactured Protests In Iran, Trump Can Now Pull The Switch On...
1535

27 January
2018
Murderous Trump Regime Trying Everything To Implement It's Own Policy On...
1197

22 April
2018
Chemical Inspectors Finally Arrive In Douma After A Long Delay Being Blocked By...
1252

23 April
2018
Chemical Inspectors OPCW Have Confirmed That They Have Finally Collected...
1280