Report: Trump to Oust Tillerson, Replace Him With Mike Pompeo

Sen. Cotton Expected to Take Over at CIA

Secretary of State Rex Tillerson has had a troubled year at the State Department, his attempts to improve the department met with scorn from other top officials, and his talk of diplomacy undercut, often very publicly, by the president. The latest reports indicate his long-anticipated departure from State could be coming in the next few weeks, under a new plan pushed by Gen. John Kelly, which would see Tillerson ousted, and replaced by current CIA Director Mike Pompeo.

Though Tillerson has publicly denied being unhappy or seeking to resign, it’s been repeatedly reported by top officials, including Sen. Bob Corker (R-TN), that Trump has been damaging Tillerson’s efforts and undercutting him at seemingly every opportunity. Other officials say the Trump-Tillerson relationship has been souring for some time, despite Tillerson’s denials.

The nature of the reported change also suggests a change in the administration’s focus, with Tillerson having, for instance, ruled out imposing regime change in North Korea, while Pompeo, said to be a Trump favorite recently, has openly advocated it.

After meetings, officials say Pompeo and Trump stay behind to talk, and he seems to have the president’s ear. That’s disturbing, however, since Pompeo has largely been critical of diplomatic efforts throughout his career in politics, preferring to advocate bellicosity. Trump has never been one to favor diplomacy either, despite his talk of making deals, and while it makes some sense that he would want a top diplomat who is similarly averse to talking, it’s also clearly risky.

Tillerson, after all, despite being so often undercut, has been fairly popular abroad for his efforts to try to dial back talk of war. Though the administration may not always appreciate it, Tillerson has been doing a lot of damage control for them.

Indications are that Pompeo’s departure from the CIA would be followed by Sen. Tom Cotton (R-AR), a pro-torture pick that’s also likely to attract a lot of scrutiny. Cotton is also an outspoken advocate of the drone assassination program.

The US secretary of state, Rex Tillerson, made an unannounced visit to the White House on Thursday after multiple press reports emerged that Donald Trump was hatching a plan to oust him and replace him with the CIA director, Mike Pompeo.

Asked on camera if he wanted Tillerson to stay at his post, Donald Trump did not reply directly, saying only: “He’s here. Rex is here.” As reports of his imminent departure swirled in Washington, the secretary of state had been spotted by reporters on the White House grounds, a visit that had not been on his public schedule for the day. 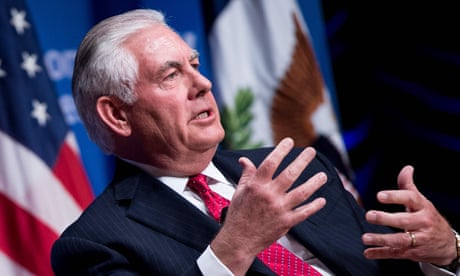 The White House spokeswoman, Sarah Sanders, repeated Trump’s statement about the secretary of state’s current whereabouts, adding: “There are no personnel announcements at this time. Secretary Tillerson continues to lead the state department and the entire cabinet is focused on completing this incredibly successful first year of President Trump’s administration.”

The New York Times first reported on Thursday morning that a plan had been developed by the White House chief of staff, John Kelly, to force Tillerson out, move Pompeo, a former Republican congressman, to the state department and replace Pompeo at the CIA with the Arkansas senator Tom Cotton. The report was quickly confirmed by other media outlets quoting White House sources, but all the reports said Trump had not yet made up his mind whether to execute the plan.

The president’s relations with Tillerson, a former oil executive, have been increasingly strained. The secretary of state publicly disowned him over Trump’s response to a neo-Nazi march in Virginia, saying the president “speaks for himself”.

Tillerson was also reported to have referred to Trump as a “moron” at a meeting of national security officials, a report he did not deny. For his part, Trump has repeatedly contradicted and undermined Tillerson’s attempts at diplomacy, telling him on Twitter in October that he was “wasting his time” seeking a dialogue with the North Korean regime.

The Republican chair of the Senate foreign relations committee, Bob Corker, told reporters on Thursday morning that he had just talked to Tillerson who had not been informed of any forthcoming changes.

“He’s conducting business, as is the norm, and is unaware of anything changing,” Corker said. Corker, the Tennessee senator, who recently said that Tillerson and a few other top officials “help separate us from chaos”, suggested that the secretary of state was the target of palace intrigue.

“It’s been evident to me that for some time, somebody is seeking to undermine his presence there. I don’t know who that is,” he said.

At a briefing later, state department spokeswoman Heather Nauert said Tillerson remained committed to doing his job and would continue until if and when the president decided he no longer wanted to keep him.

A spokeswoman for Senator Cotton insisted his “focus is on serving Arkansans in the Senate”.

If the changes do take place as reported, the immediate effect would be a cabinet that was on balance more personally loyal to Trump, and more hawkish, particularly on Iran. Both Pompeo and Cotton have been staunch opponents of the 2015 nuclear deal with Tehran. Cotton has been a longstanding advocate of military action, suggesting limited airstrikes would be enough to contain the Iranian nuclear programme.

“The United States has the ability to totally destroy Iran’s nuclear infrastructure,” Cotton said in October. “If they choose to rebuild it we can destroy it again.”

Pompeo has also suggested the administration was considering pursuing regime change in North Korea, something that Tillerson has publicly ruled out.

Thomas Wright, the director of the centre on the United States and Europe at the Brookings Institution, said he doubted Trump, a former reality show host, would announce all the personnel changes in one go.

“I would be surprised if he did it immediately. He loves the theatre of doing auditions and then having people wait for the announcement of the winner of the show,” Wright said. He added that if the reshuffle did take place as reported it would mean “the days of supervision are coming to an end”.

“The last period, as bad as it was, may actually be as good as it gets. The longer Trump is in there, the more he finds ways of exerting control over his own bureaucracy by putting in place some true believers and some opportunists.”

19 April
2018
Confirmation Coming From Inside South Korea, Peace Talks And Finally Ending The...
1160

8 May
2018
Terror In The CIA As Warmonger Trump Defends Spymaster And Torture Queen Gina...
1195

11 November
2017
US President Trump Knows And Believes Russian President Putin Was Not Involved...
1496

1 May
2018
Trump CIA Terrorists ISIS Mutilating Their Prisoners, Turning Them Into...
6146