Mother Russia Throws Out More Trash, 59 More Diplomats From 23 Countries Have Been Kicked Out, Expelled, More Garbage To Be Thrown Out Soon !

For the second straight day, Russia has announced the expulsion of a substantial number of Western diplomats. At latest count, 59 more diplomats were expelled Friday, from 23 different countries. This follows 150 expelled on Thursday.

In Retaliation, Russia Expels Scores of Diplomats From 23 Countries

Says more action may come after two days of ousters 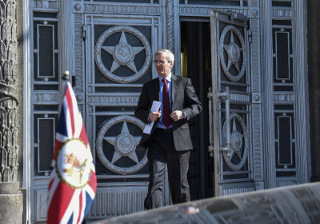 The 23 nations that saw expulsions on Friday were almost exclusively members of the European Union, in retaliation for a series of expulsions of Russian diplomats from the same nations earlier in the week.

In general, the numbers announced for each nation are identical to the number of Russians they expelled earlier in the week. This is true from the expulsion of 60 American diplomats, and closure of an American consulate, after the US expelled 60 Russians and closed one of their consulates.

Three nations with unconfirmed expulsions are Canada, Australia, and Macedonia. Russia’s Foreign Ministry summoned the three nations’ ambassadors, but there haven’t been public announcements on what happened yet.

Four nations that have yet to see reciprocal expulsions were named specifically by Russia. The four were identified as Belgium, Hungary, Georgia, and Montenegro. Russia says they reserve the right to order moves against them in the future.

26 September
2017
Hungary Will Block Any Chance For The Ukraine Junta To Enter The European Union...
1775

24 September
2017
Spain Wanting To Crush The Catalan Independence Movement, Now Say It Is All...
1634

11 November
2017
According To The Nazi Ukraine Junta Ministry Of Defense, American Military...
1286