North And South At Peace, And This Without Trump's Meddling, Highest Level State Visit By DPRK Delegation To South Korea Ahead Of The Winter Olympics !

This week, North Korea will be making its highest level state visit to South Korea since 2014, as Kim Yong-nam, the President of the Presidium of the Supreme People’s Assembly, is to lead a delegation of top officials to South Korea ahead of the Winter Olympics.

Highest Level Visit to South Since 2014 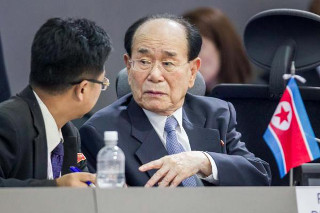 Kim’s visit further underscores a dramatic improvement in relations on the Korean Peninsula over the past month, with very tentative meetings in the DMZ having already netted major participation for the Olympics, and now this major delegation.

That relations have improved that much that quickly is raising questions about whether it’s even possible this happened with no US involvement, or if it could be inferred that the US is engaged in its own behind-the-scenes talks with North Korea as well.

Publicly, the US isn’t admitting any such talks are ongoing, and indeed, they’ve made much of Vice President Mike Pence heading to South Korea for the Winter Olympics specifically to undercut North Korea. Whether that’s what he’s actually doing or not remains to be seen.

16 May
2018
Provocations By Warhead Trump As North Korea Cancels High Level Talks With The...
1097

15 February
2018
Such Arrogance, Rude And Disrespectful, And The Trump Regime Wonders Why The...
1720

28 April
2018
Full Historical Text Of Declaration For Peace, Prosperity And Unification Of...
1289