Not Only Has Turkey Illegally Invaded Syria And Causing A Refugee Crisis, But Now Turkish Border Guards Are Shooting At Syrian Civilians, 10 Killed By The Erdogan Regime !

Syria’s invasion of the northern Idlib Province has sparked a new exodus of people trying to flee across the border into neighboring Turkey. That border hasn’t exactly been a welcoming one for awhile, and according to Human Rights Watch, has gotten much worse. 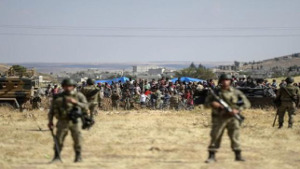 In recent weeks, Turkish border troops have been accused of arbitrarily closing the border to asylum seekers, allowing in only the worst medical cases, and in many cases shooting at civilians trying to flee into southern Turkey.

Such reports have come out before, with Turkey trying to deter more refugees and at times turning their guns on crowds to try to scare them away from the border. Turkey, however, is denying that these new reports are true, saying they welcome all refugees.

At least 10 people have been documented as having been killed by Turkish border guard fire into Syria, though the Erdogan government says there has been “no case” of civilians being fired upon at the border.

24 January
2018
Turkey Says It Will Coordinate Military Operation In Afrin With Iran And Russia...
3049

14 January
2018
All Syrian Militant Terrorists Who Are Responsible For Recent Attacks On...
1315

15 April
2018
Things Are Getting Pretty Ugly As The International Community Is Choosing Sides...
1722