Once Again Netanyahu And His Henchmen Open Fire And Kill Scores Of Innocent Protesters In Gaza, Palestinians Promise More Burning As Day Of Tires Will Continue !

A week after Gaza’s Land Day protests, tens of thousands of demonstrators showed up at the Gaza border for the “day of tires,” where protesters burned tires near the border fence. As with the previous week, Israeli forces positioned and the border opened fire on protesters, killing several. 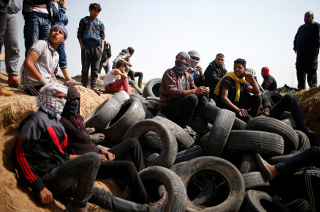 As with last week’s attack, the death toll is still being sorted out as of the evening, but at least 10 were reported killed, including two teenagers, and around 1,000 Palestinians were wounded. The toll is less than the previous week, as the rally was smaller.

That’s still a lot of casualties, and Israeli forces even used a drone to attack and kill a protester, suggesting that Israel is continuing to raise the stakes, and risk more unrest along the Gaza border, where a protracted blockade and constant airstrikes have left the population angry and desperate.

Organizers say that they intend to hold protests weekly for six weeks at the Gaza border. The second week has come and gone, and there’s little sign it’s going to evaporate. Unfortunately, there’s also little sign the Israelis aren’t going to keep answering it with live ammunition.

21 May
2018
International Peacekeeping Force For Gaza, An Amazing Idea But The Fascist...
1317

21 May
2018
Fascist Regime Of Israel Attacks The UN Human Rights Council Investigations On...
1480

24 March
2018
Total Madness, The Trump Regime To Cut Humanitarian Aid To The Palestinians To...
1088

2 June
2018
U.S Regime Blocks UN Vote On Protecting Palestinians, But Has Been Humiliated...
1119

27 May
2018
Fascist Israel Will Arrest Anyone Who Photos IDF Soldiers Killing Palestinians...
3163