Our Serbian Hero Vojislav Seselj Will Continue To Spit On And Burn The Nazi Croatian Flag And Even Curse Their Ustasha Whore Mothers !

The "Ustasha" reference concerns the WW2-era, Nazi allied Independent State of Croatia (NDH) - and the leader of the opposition SRS spoke to reporters a day after an incident in the Serbian National Assembly that prompted a visiting Croatian delegation to cut short their visit, and Zagreb to attempt to deliver a protest note to the Serbian ambassador to Croatia.

Vojislav Seselj says he will "continue to spit and trample on, and set the flag of the Croatian Ustasha state on fire."~

But the main topic of Seselj's press conference today was whether the incident happened at all - considering that no journalist witnessed it.

"Well, this is a real conspiracy. I want a new court procedure, and you're saying it never happened," Seselj said. "I don't know how to reply. Why would I make it up? Is it that no reporter believes me? Is there anyone who does?"

Since the reporters in the room failed to answer this question, Seselj concluded:

"Nobody? Well, this is a real journalistic conspiracy today. We'll have to (do it) again."

"It's really incredible that you doubt whether that event happened," he continued. "And it did happen, and even if it hadn't - the effect is quite solid."

Seselj then said that Assembly's security saw it happen, and that members of his party "wrestled with them (over the flag)."

"Members of the (Croatian) delegation heard me curse their mother. First I said that I trampled on the Croatian Ustasha flag, and then I cursed their Ustasha mother. And what would you like to say, that we made it up, and the fools fell for it? Well it would be extraordinary if that was the case - but we did not make it up," Seselj said.

He also urged reporters to ask Serbia's interior minister whether there was video footage from the entrance to the Assembly, where the incident happened.

Previously, Seselj said that "all Serb patriots and honorable Serbs" support what he, and anther SRS member of the Assembly, Filip Stojanovic, did on Wednesday, and noted that it made the president, the prime minister, and the Assembly president all react.

"The president says - one can't expose to ridicule any sovereign country's flag. Well, one can, because aggression against the Republic of Serb Krajina was carried out under that flag. 200,000 Serbs were expelled (from Croatia), while several thousand civilians were killed," the leader of the Radicals said.

Reporters on Thursday asked Interior Minister Nebojsa Stefanovic whether he knew if there was footage of the incident, to which he replied that he "does not know."

He added that the Interior Ministry (MUP) is yet to receive any complaints or request concerning the incident.

"If the prosecution asks for some investigation to be carried out, the MUP will do everything that is in its jurisdiction," Stefanovic said, and noted that he learned about the incident "from the media."

The Croatian website Index, meanwhile, said it learned from the Serbian Assembly that the incident was not recorded, because the flags are displayed in a spot not covered by security cameras. 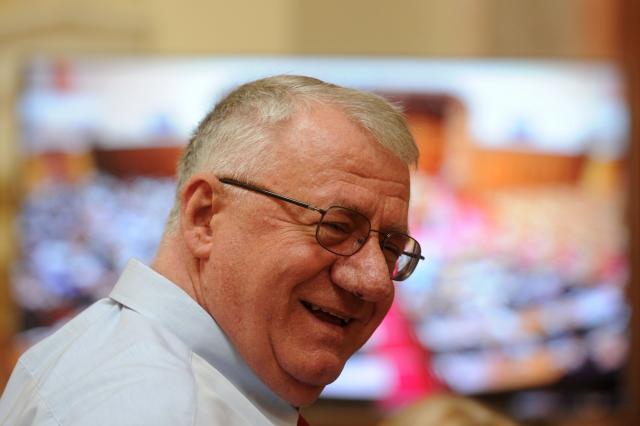 24 April
2018
Serbia To Build Museums Dedicated To Holocaust Victims, A Reminder To The World...
1567

10 November
2017
Things Are Getting Hot Between The Nazi Ukraine Junta And Serbia, Ivica Dacic...
2191

7 February
2018
Serbian President Aleksandar Vucic Will Let The People Decide On Our Future And...
1411

5 May
2018
Sickening As The Austrian Church Inquisition Is Allowing The Largest Nazi...
2491

21 August
2017
BREAKING NEWS, Entire Serbian Embassy Staff Have Left Macedonia Due To The...
4516