Over 100,000 Greeks Gathered In Thessaloniki To Demonstrate Against The Use Of The Word "Macedonia" In Solving The Name Dispute !

More than 100,000 Greeks gathered in Thessaloniki to demonstrate against the use of the word "Macedonia" in solving the name dispute between Athens and Skopje.

Organizers claim that 400,000 people gathered on Sunday, while the police unofficially estimated the crowd at 100,000, the AP reported.

The protest was not linked to any political party and was attended by priests, members of Macedonian trade unions from northern Greece, conservative and socialist local politicians and retired military officers, the Greek website Greek Reporter said.

The goal was to "clearly send a message to the Former Yugoslav Republic of Macedonia (FRYOM) to stop using the word 'Macedonia' in its name."

This was the first major protest in Greece since the two countries agreed this month renew efforts to resolve the 25-year dispute.

Greece is blocking Macedonia's attempts to join NATO and the EU, arguing that the name "Macedonia" implies territorial pretensions toward the northern Greek region of the same name, which includes the city of Thessaloniki.

Pending a resolution to the dispute, Athens agreed to allow Macedonia to use the name "Former Yugoslav Republic of Macedonia (FYROM)" internationally and that is the name under which the country was admitted to the UN in 1993. 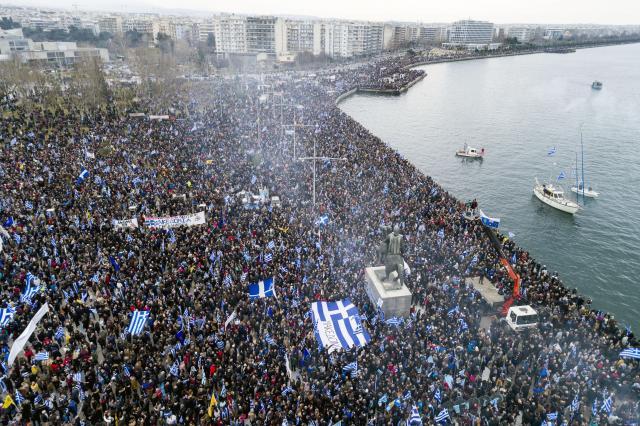 26 December
2017
Macedonian Traitor And Puppet Zoran Zaev Ready To Give Up Claim To Alexander...
2911

6 February
2018
Traitors, Just For Money, The Greeks Could Recognize Kosovo If Washington Asks...
1506

18 June
2018
Demonstrators Arrested And Police Wounded During Violent Protests In Skopje Due...
1523

14 June
2018
Protests Erupt In Skopje As Molotov Cocktails Fly, The President And The People...
1091