Pentagon Doubts Anything Was Destroyed In US Airstrikes And Now Claiming The Syrian Government Still Has Chemical Weapons Capacity !

Pentagon officials offered a briefing Thursday saying they believe they have evidence that there were “elements” of sarin nerve gas at the sites that US-led coalition forces bombed on Friday evening. Officials said they hurt Syria’s ability to research chemicals, but probably didn’t eliminate their chemical weapons capacity. 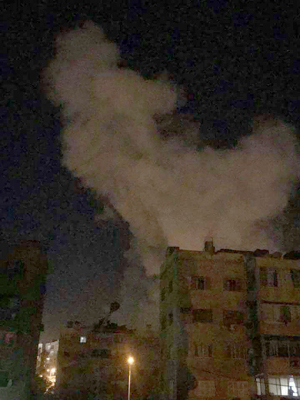 No evidence was offered for either. This gives the impression that Pentagon officials are still trying to sell the attack on Syria a week later. In particular, claiming that Syria retains some capacity that might nerve as a pretext for more US attacks in the future. If nothing else it allows the US to make such allegations, as they did in Douma, irrespective of the evidence.

The Pentagon is clearly not being forthright on the details of the Friday attack. Officials also claimed Thursday that no civilians were killed, despite images clearly showing one of the strikes doing major damage to an apartment complex near a research facility.

The Pentagon further claimed not a single of the 105 missiles was intercepted Friday. Again, videos showing interceptions were released almost immediately after the attacks. The Syrian Observatory for Human Rights also claimed 65 of the 105 were intercepted.

The US never offered any real proof Syria had chemical weapons or that Syria had attacked Douma with them in the first place. They rather declared them to be a fact before attacking. That leaves them trying to continue the narrative going forward, once again without solid evidence.

19 April
2018
Sickening As The United Nations Once Again Blocks Chemical Inspectors OPCW From...
1909

22 April
2018
Chemical Inspectors Finally Arrive In Douma After A Long Delay Being Blocked By...
1296

23 April
2018
Chemical Inspectors OPCW Have Confirmed That They Have Finally Collected...
1331

25 April
2018
A Challenge To The Pentagon, Warmonger Trump Again Calls For Troops Pullout...
1178

25 April
2018
Worried About A Disgusting And Shameful Situation Including Russian Vetoes, The...
1703

18 June
2018
American Drones Attack Syrian Military Forces, There Are Casualties But The...
1570

18 September
2017
UN Security Council Running Out Of Options, The US Regime Must Destroy North...
1441