President Of France Emmanuel Macron In Shock, Thousands Of French Catalans Hit The Streets, A French Region Across The Border From Spain Has Called For A United Catalan State !

THE controversy surrounding the struggle for Catalan independence from Spain has crossed over the border, as 'Northern Catalans' demanded freedom from France.

As the struggle for Catalan independence from Spain continues to venture into unknown territory, a French region across the border have demanded a united Catalan state.

Around 2,000 protesters took to the streets yesterday in Perpignan, southwestern France, to demand their own independence referendum.

Activists at the peaceful march revealed their hopes for a 'united Catalan state' that would break apart Spain and France - amid fears of an independence domino effect in the EU.

People held esteladas - Catalan independence flags - during the massive demonstration in Perpignan, under the motto 'We are Northern Catalonia, we want to decide'.

The demonstration in the Pyrénées region marked the anniversary of a 1659 Treaty, where Catalonia was taken over by French and Spanish control.

One protester said: "I am for democracy, for freedom and for defending the freedom of Catalonia North and South. We are here to support political prisoners."

Another added: "We are behind the protesters in Catalonia and I am very proud of the mobilization here in Perpignan."

Many voiced their frustration at the local town hall for refusing to erect the Catalan esteladas, after councillors feared for to its "extreme politicitization".

The people attending the march also demanded the release of the Catalan 'political prisoners' - the members of the deposed Barcelona government who have been jailed by Spain.

Nine Catalonian politicians have been jailed, while Madrid has issued a European Arrest Warrant against Carles Puigdemont.

Members of the Catalonian leadership face up to 30 years in prison for their attempt to breakaway from Spain.

Also on Saturday, thousands of Basque people showed their solidarity with Catalan independence and against Madrid's use of Article 155. 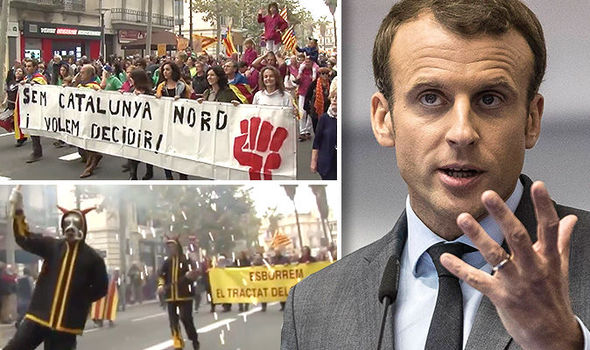 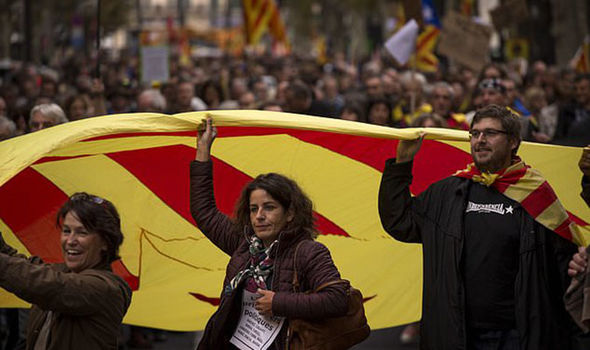 21 October
2017
Fascist Spain Government Is Set To Take Over Catalonia With The Full Backing...
1597

10 October
2017
Catalonia Under Pressure, France And Germany Against Catalan Independence And...
2038

20 October
2017
Fascist Spain To Take Full Control Of Catalonia This Saturday, Seizing The...
1718

4 October
2017
Catalan To Proclaim Independence Within Days As Fascist King Of Spain Screams...
1677

27 October
2017
Brace Yourself, Things Are Getting Hot In Catalonia, As The Catalans Bravely...
1917

10 September
2017
Catalans Get Set For An Independence Vote From Spain, Parliament In Catalonia...
1490

10 September
2017
War Of Words Between Catalonia And The Fascist Government Of Spain, Threats To...
2139

11 March
2018
The Spanish Regime Will Not Release Catalan Leader From Prison, Jordi Sanchez...
1653

21 October
2017
Fascist Spain Has Taken Over Catalonia, Catalan Government Now Under Control Of...
2744