Puppet State Britain, NATO And The EU Needs To Show Proof Or Offer A Public Apology To Russia, War Of Words Getting More Tense !

The British government continues to double down on allegations of a Russian chemical weapons attack using a “nerve agent” against targets in Salisbury. This continues despite mounting doubts about the narrative, including a lack of symptoms from any of the other nominally “exposed” people. 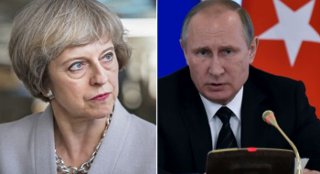 Theresa May and Vladimir Putin

Russia, which has repeatedly expressed annoyance at the accusations, is getting even more direct about the matter. They are now insisting Britain must either offer real proof for the claims, or a public apology for blaming them.

Britain is unlikely to do either, with signs that they simply don’t have proof, and too many top officials committed to ever admit they were wrong. Since evidence (or indeed truth) were only ever secondary concerns, being wrong is not likely to be a serious impediment.

This is especially true because both the European Union and NATO have issued statements expressing “solidarity” with the British over the allegations. Even if they are wrong, British officials may take comfort in being in good company in their wrongness, and given the amount of acrimony between Britain and Russia, that may be all that matters to the government.

4 April
2018
Things Are Starting To Look Pretty Embarrassing For The British Kingdom, Where...
1731

6 February
2018
Traitors, Just For Money, The Greeks Could Recognize Kosovo If Washington Asks...
1518

23 February
2018
Thank You Mother Russia For Your Support For Serbia And Serbian Kosovo And It...
2236

5 April
2018
Frustration And Embarrassment As The British Kingdom Foreign Office Is Accused...
1033

6 April
2018
The British Regime Will Pay For Their Sick Accusations, Russia Has Warned PM...
836