Saudi warplanes attacked and destroyed a house on the outskirts of northern Yemen’s city of Saada Tuesday, killing five civilians and wounding a number of people, including paramedics who arrived after the initial site and were targeted in two subsequent strikes.

Strikes destroyed house outside of city of Saada 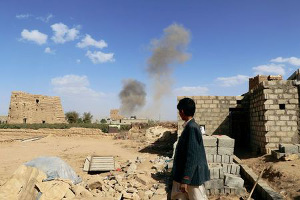 As usual, Saudi officials did not comment on the attack, either on the report of civilian deaths or why this house was targeted in the first place. Strikes are common in the Shi’ite-dominated Saada Province, though they rarely hit anything but civilians.

That paramedics were attacked afterwards trying to rescue survivors isn’t surprising either, as this “double-tap” strategy has become increasingly common in air wars across the Middle East, with the idea that anyone trying to rescue a target must necessarily be a valid target themselves. Oftentimes, more casualties are inflicted in this subsequent strikes.

This is the second Saudi strike against Saada of the week, with the previous attack targeting several vehicles on the road leading into the city, killing at least 15 civilians.

1 March
2018
The Slaughter Continues With No Mercy, Five Little Girls Ripped To Pieces By...
1424