Secret Wars: Syrian SAA Tiger Army Together With The YPG Kurdish Forces Fighting Against The Turks And The U.S. Regime !

Turkey’s invasion of Syria’s Afrin District has mostly been about Turkey fighting against the Kurdish YPG, and also the possibility of a fight between Turkey and the US. Somehow, the Syrian government was forgotten on this. 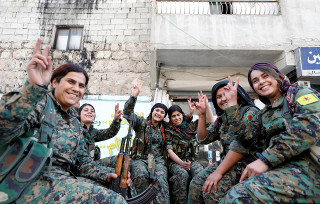 But they were watching the invasion, and have been quietly sending support to the YPG, reflecting the obvious mutual interest in keeping Turkey from expanding its presence in Syria.

Turkey, after all, has long since ended its historic ties to Syria’s government, and has been giving all territory it seizes to Syrian rebel factions. The YPG controls some 25% of Syria, and Syria clearly doesn’t want that all falling to the rebel.

This puts both Syria and the US in a tough situation, as they’re both allied with the Kurds, but both severely at odds with one another, with Syria saying US troops are unwelcome, and the US coming off of killing over 100 pro-government fighters last week.

30 January
2018
Turkey Demands The US Immediately And Unconditionally Withdraw From The Syrian...
1068

21 February
2018
Incredible, The Audacity Of The Turkish Regime Attacking The Syrian Army In...
1407

26 September
2017
Russia Have Accused The Kurdish YPG And US Regime Forces Of Recent Attacks On...
2052