Senate Will Try To End Trumps War On Yemen Which Is Not Authorized And Use The 1973 War Powers Act !

Formally announced on Wednesday, a new bipartisan bill in the Senate is attempting to force an end to the US involvement in the Saudi invasion of Yemen because the war was never authorized by Congress.

Senate Bill Would Force End to US War in Yemen 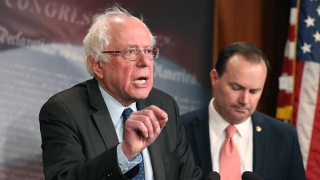 Introduced by Sens. Bernie Sanders (I-VT) and Mike Lee (R-UT), the bill makes use of the 1973 War Powers Act, which gives legislators the ability to force an end to any unauthorized US military conflict. This is the first time the Senate will have ever attempted to do so.

There are multiple unauthorized wars going on, of course, but recent US presidents have argued that the 2001 Authorization for the Use of Military Force (AUMF) could vaguely be interpreted to cover them. That clearly is not the case in Yemen, however.

Pentagon spokeswoman Dana White was the latest to take a crack at justifying the Yemen War on Thursday. She argued that Saudi Arabia has been “attacked from Yemen by Iranian backed Houthis.” The Houthi strikes on Saudi Arabia, of course, happened deep into the war, long aftter US involvement began.

Other US officials have suggested that the legal pretext for the war is that the US has sold Saudi Arabia all the warplanes and promised to “service” those planes, which in and of itself meant refueling the planes during combat operations.

White insisted she is confident there’s some sort of authorization for the war, but also said she didn’t want to comment specifically on the legislation itself.

4 October
2017
The Trump Regime And Saudi Coalition On United Nations Blacklist For Killing...
1432

27 January
2018
Murderous Trump Regime Trying Everything To Implement It's Own Policy On...
876

5 September
2017
Murderers And Child Killers, Saudi Arabia And The Trump Regime Care Nothing For...
2060