While Serbia has said its main goal is to join the European Union, it has refused to join the bloc in imposing sanctions against Russia over the crisis in Ukraine, and unlike its neighbor Montenegro, which joined NATO in June, Serbia has expressed no interest in becoming part of that alliance ! 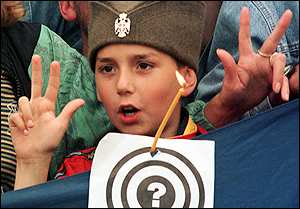 In addition, NATO sees nothing disputable in it, and it does not represent an obstacle to the development of cooperation with Serbia in a number of fields, Gottemoeller said on Thursday in Belgrade during her meeting with Serbian President Aleksandar Vucic.

Vucic said cooperation between Serbia and NATO had improved significantly and that mutual trust had been increased. 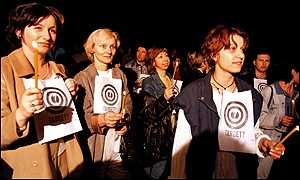 He reiterated that Serbia was a neutral country, without intentions to change that status, but that it was also firmly resolved to cooperate with the Alliance within the Partnership for Peace program, with the aim of preserving peace and security in the region.

“In 11 years of participation in the Partnership for Peace program, Serbia has accomplished significant cooperation with the member states of NATO and partner countries, while implementing the best experience and standards in the modernization and strengthening of its armed forces and defense capacities,” Vucic said, adding that it was extremely important for NATO to continue with its principles and status-neutral approach to Kosovo.

He said that, for Serbia, NATO was an unavoidable factor of regional stability, and KFOR an important factor of security and survival of the Serb community in Kosovo, and of the preservation of Serb cultural and historic heritage.

Another topic of the talks was the realization of the initiative for using the commissioner fund for mine clearing and removal of cluster bombs in Serbia, which will be carried out with the help of the Dutch government.

Prime Minister Ana Brnabic also received Gottemoeller on Thursday, when she “Expressed satisfaction with the pace of development of political dialogue of Serbia and NATO,” the government announced.

Brnabic underlined that Serbia remains military neutral, but that it is ready to develop cooperation with the Alliance within the Partnership for Peace program, and that it is dedicated to the implementation of joint projects.

She added that during its participation in Partnership for Peace, Serbia has made significant cooperation with NATO member states and it applies the best experiences and standards in the modernization and strengthening of its armed forces and defense capacities.

Stressing that the Serbian government conducts a responsible policy, the Prime Minister confirmed that our permanent commitment is cooperation with all international factors, taking into account the state and national interests.

She assessed that the level and content of the cooperation to date represent a good basis for further joint work.

Brnabic and Gottemoeller “agreed that Serbia and NATO are strongly linked by a common interest in preserving peace and stability in the region of the Western Balkans.”

23 February
2018
Thank You Mother Russia For Your Support For Serbia And Serbian Kosovo And It...
2810

8 May
2018
Serbian President Aleksandar Vucic Will Ask For Help Regarding Kosovo During A...
1477