Serbian Park In Belgrade Is Renamed In Honor Of The Russian Army Ensemble "Alexandrov" , And The Serb People Will Never Forget The Support By The Choir During NATO Bombing in 1999 ! (PHOTOS)

The park next to the monument to Tsar Nikolai II Romanov in Belgrade was  named after the Russian Army’s Aleksandrov (Alexandrov) Ensemble.

“Our Russian friends have insisted that this should not be the marking of a tragedy, but of a new beginning. The ensemble was quickly renewed and is starting a new tour. After Belgrade, they will perform in Novi Sad, then in Banja Luka (in the RS), and then in other cities around the world. They are starting in Serbia – that’s an indication of a great friendship that we must maintain and cherish. It’s also symbolic that the building of the Russian embassy used to be here, and the Russian House is here as well,” Mladenovic concluded.

Late last year, 64 members of this famous artistic group were among the 92 victims of an airplane crash.

Deputy Mayor of Belgrade Andreja Mladenovic told RTS on Thursday that Serbia and its capital will repay the ensemble that performed here 11 times by naming the park after them.

“The ensemble, that is, the choir, the dance group and the orchestra, which are world famous, will celebrate 87 years this year. We are in their debt for the great support they gave us during the (NATO) bombing in 1999,” Mladenovic said.

Mladenovic also stressed that the park, located between the monument to Russia’s last tsar and the Russian House in central Belgrade, previously had no formal name.

He added that members of the Aleksandrov ensemble and of Serbia’s Stanislav Binicki choir will tomorrow unveil two memorial plaques, while officials will plant a birch tree, as a symbol of new life.

“Our Russian friends have insisted that this should not be the marking of a tragedy, but of a new beginning. The ensemble was quickly renewed and is starting a new tour. After Belgrade, they will perform in Novi Sad, then in Banja Luka (in the RS), and then in other cities around the world. They are starting in Serbia – that’s an indication of a great friendship that we must maintain and cherish. It’s also symbolic that the building of the Russian embassy used to be here, and the Russian House is here as well,” Mladenovic concluded.

This Russian Armed Forces ensemble will also this evening perform in the Serbian capital, for the 12th time.

A park in central Belgrade, near the monument to Tsar Nikolai II Romanov and the Russian House, was on Friday named after the Ensemble Aleksandrov (Alexandrov).

Vukosavljevic - who launched the initiative to rename the park - said on Friday that the reason was "the sad memory of last December's tragedy - when 64 members of the 'Red Army choir' lost their lives (in a plane crash)."

He stressed that the Aleksandrov represented not only "one of the world's most important ensembles" - but were also "a great friend to the Serb people, ones who stood by us in our most difficult moments."

"There are great artists around the world - but great people, adorned by honorable virtues, are few. For that reason, the great imprint of the Aleksandrov Ensemble in the memory of the Serb people is indelible," Vukosavljevic said.

Serbs and Russians, he continued, are linked by their "collective memory" - and the great sacrifice that both nations made "in their fight for freedom, and integrity."

"We will continue to cooperate with Russia in the realm of culture even more intensively, and that will be a chance for Serbia and Russia not to be sitting on two chairs - as some would like to put it - but to do as we have always done," the Serbian minister said - in apparent reference to a recent statement, perceived as controversial in Serbia, by a US State Department official who said Serbia would "have to choose" between the East and the West and, "not sit on two chairs."

"We sit together, firm and united, on the throne of Slavic culture, together with other Slavic nations. We understand this as our obligation, our historic duty, and our particular pleasure," Vukosavljevic stressed.

Russia's ambassador, Aleksandr Chepurin, said that "an Aleksandrov Park" already exists in Moscow - next to the Kremlin - but this space is named after (Russian Tsar) Aleksandr I - while the Belgrade park is named after Aleksandr Vasilyevich Aleksandrov, the author of (the music for) the national anthem of the Soviet Union, and of the Russian Federation.

Chepurin remarked that he spoke with Serbian President Aleksandar Vucic ahead of Friday's ceremony, and that they discussed the possibility of the space in Belgrade being modeled after Aleksandrovsky Sad (Alexander Garden) in Moscow itself - and thanked Belgraders and the city of Belgrade for the respect they showed toward Russia, the Russian Army, and the Aleksandrov Ensemble.

Deputy Mayor Mladenovic recalled in his address that last December - when the ensemble lost 64 of its members in a plane crash - Belgraders showed how much they appreciated, and how much they cared for, the Aleksandrov Ensemble.

"With various gestures we have demonstrated that we do not forget our friendship and our ties with the Russian people and the Russian Federation," he said, mentioning the monument dedicated to Russian sailors who were the first to join the defense of Belgrade and Serbia in WW1 in 1914 - raised in Belgrade's central Kalemegdan Fortress - and the work to repair the Russian Necropolis in the Serbian capital.

"We have not forgotten, either, our great (Russian post WW1 emigree to Serbia) architect Nikolai Krasnov, nor the people (Red Army soldiers) who liberated Belgrade in 1944, who gave us our freedom - neither (Red Army) General Zhdanov nor Marshal Biryuzov, who gave their lives, so that we can live today, free, in our own city, in our own country. We have not forgotten, either, (Russian) Tsar Nikolai II Romanov, who used his authority to save the Serbian Army and who contributed to it returning to Serbia victoriously, 100 years ago," Mladenovic said - apparently referring to Russia's last tsar warning France and Great Britain in 1915 that he would withdraw from the Great War unless these countries, capable of doing so at the time, helped use their ships to transport retreating members of the Serbian Kingdom Army, stranded in Albania in 1915, to Greece.

Those gathered on Friday in Belgrade honored the Aleksandrov members who died in the plane crash with a minute of silence. After this, the director and art director of the ensemble, Gennady Sachenyuk, and Svetozar Vasileski - the head of the Serbian Ministry of Defense Ensemble named after Stanislav Binicki - unveiled a memorial plaque at the park.

Russian and Serbian national anthems were then sounded, followed by the Aleksandrov choir performing iconic songs such as Russia's WW2-era "The Sacred War," Serbia's WW1-era "There, Far Away"(Serbian: 'Tamo, Daleko') - and, "Victory Day" - while the Stanislav Binicki Ensemble also performed "To Belgrade" - an ode to the Serbian capital.

Representatives of the Serbian government, the City of Belgrade, and the Embassy of the Russian Federation on Friday also planted birch trees in the park - a symbol of eternal life, and of their conviction that the Aleksandrov Park in Belgrade represented yet another link between the two nations and the two states. 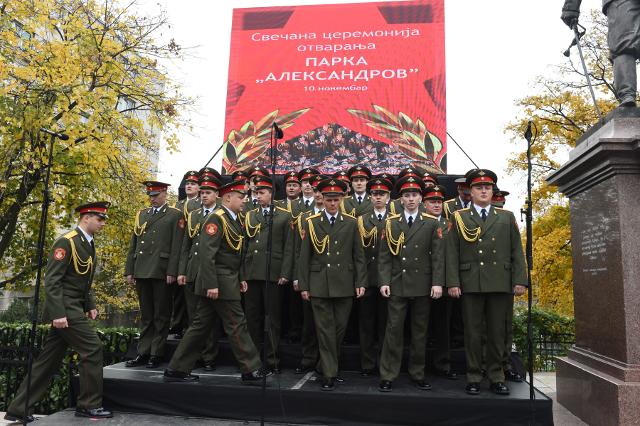 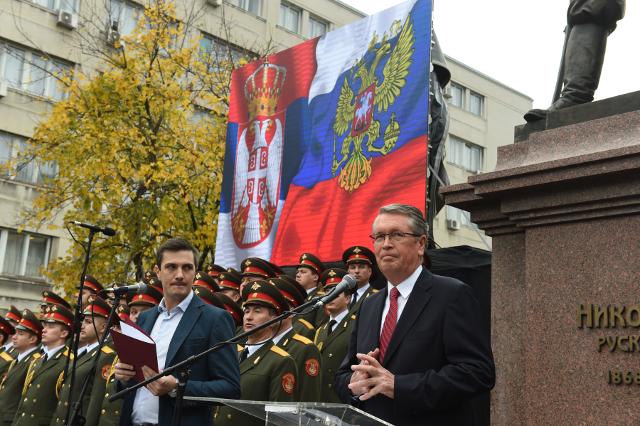 14 September
2017
Terrorist Organization NATO And The Trump Regime Are Preparing For A Anti...
2770

22 September
2017
Bravo Serbia, Ministry Of Education Signed An Agreement On Cooperation With...
2028

6 October
2017
A Serious Squadron, Convincingly The Strongest In The Region, Great Serbia...
1842

10 November
2017
Things Are Getting Hot Between The Nazi Ukraine Junta And Serbia, Ivica Dacic...
2448

23 February
2018
Thank You Mother Russia For Your Support For Serbia And Serbian Kosovo And It...
2410

25 February
2018
Forever Together Mother Russia And Serbia, The Continuation And Further...
1303