Serbian President Aleksandar Vucic Demands Investigation Of The Terrorist Act In Kosovo, And We Know Who The Killers Are !

Serbian President Aleksandar Vucic on Tuesday described the murder of Oliver Ivanovic as an act of terrorism.

And Serbia will treat that act accordingly, Vucic told reporters in Belgrade after an extraordinary session of the Council for National Security, convened in the wake of the killing of the Serb politician in the town of Kosovska Mitrovica, in northern Kosovo.

The president also offered condolences to Ivanovic's family, on his own behalf and that of the state and the government.

"This is a terrorist act as far as the state of Serbia is concerned, and our stance toward that act will be in line with that," Vucic said.

"The perpetrators of this act will be caught, and if they don't do it - we will," added Vucic.

He said that the Council decided to send a letter to EU and UN missions in Kosovo, EULEX and UNMIK, with the request for the state organs of the Republic of Serbia to participate in the investigation in the territory of Kosovo and Metohija.

"Because we are convinced that would also mean discovering the truth about the murder of Oliver Ivanovic. We'll find the killer or the killers. I am not authorized at the moment to speak about what we have learned. I will not speculate, but there are interesting details that point to the possible perpetrators," Vucic said.

"A man who was a parent, a husband, has been killed and who certainly wasn't someone who called for a conflict between Serbs and Albanians," the president continued, speaking about Ivanovic. "Whoever carried it out - a Serb, an Albanian, a foreigner, carried out an attack on the Ivanovic family, on the Serbs in Kosovo, in the north of Kosovo, on the Serbs as a whole."

"The person who killed him is not a Serb, even if they had a Serb name, because they did everything against Serbia," Vucic said, and added that the car believed to have been used by the killers was left near the neighborhood of Brdjani on purpose, "in order to say that the killers went one way or another."

If the question were asked about whom the murder of Serbs suits, "it will be clear to everyone," Vucic continued, and added that he did not wish to address speculations, but that the killers "left certain traces."

A Serbian delegation that was in Brussels for a new round of technical negotiations with Pristina left the talks after the news of Ivanovic's killing reached them.

Vucic said this was done because it was pointless to talk while there are daily threats, and told Kosovo Assembly President Kadri Veseli, whom he referred to as "the master in Kosovo," that he would not succeed in reaching the town of Nis, as he has threatened to do.

The president said Veseli should "forget about reaching Nis with an army" - but was welcome to visit the town as a tourist.

Tanjug reported earlier in the day that Vucic spoke about the murder of Oliver Ivanovic on the phone with EU foreign policy and security chief Federica Mogherini.

"I want to point out to this fact - one country participating in KFOR has the idea to stop the simultaneous control of the administrative line (between Kosovo and central Serbia). I also have official evidence that they are increasingly frequently taking Kosovo forces along for controls," Vucic said.

This is a warning, continued the president, against trying to, besides causing tensions, use that to introduce the Kosovo Security Forces, that is, the army of Kosovo, and finally grab the Serb property in northern Kosovo.

"They should know that we read well what they are doing. According to them, it is enough to find a certain percentage of Serbs who would work in the Kosovo Security Forces... that's why they go around blackmailing, coercing...," said Vucic.

According to him, some Albanian media in Kosovo are saying the same thing as some (opposition) Serbian politicians - that Serbia is behind Ivanovic's murder, with the goal of taking control of northern Kosovo. But the president said the true intention of those saying that is "for the Albanian boot to come to the north, and that is the only meaning behind what they are doing, and it is all they want."

"Those who say they care about Ivanovic - they care terribly. They were prosecuting him horribly, like the worst criminal, for four years... once all this is over ask his family how much they helped him. To all those who say that this government is killing its political opponents, I can only say, you miserable people," Vucic said.

Kosovo, he said, is governed by Albanians and foreigners, and now they should say who the killer is. "If you won't, then we will," he said.

"Then we'll wonder how come they didn't find the killer, yet we did. Who was hiding whom, and who was protecting whom," concluded Vucic. 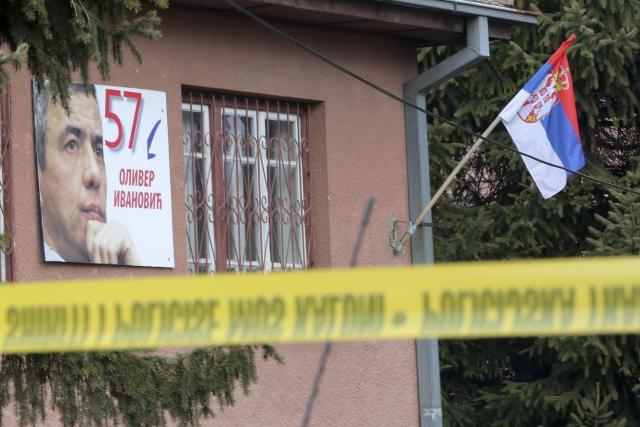 18 January
2018
Torched Car Suspected Of Being Used In The Murder Of Oliver Ivanovic Belonged...
1732

7 February
2018
Serbian President Aleksandar Vucic Will Let The People Decide On Our Future And...
1600

27 March
2018
Albanian Scum Militia Attack And Arrest Serbian Officials In Kosovo During A...
3280

14 May
2018
United Nations Security Council To Discuss Kosovo Today And The Albanians Of...
1196