Serbian President Aleksandar Vucic Will Ask For Help Regarding Kosovo During A Meeting With World Leader Vladimir Putin !

Speaking upon his arrival in Moscow, where he will meet with Putin later in the day, Vucic said that "a situation where everyone has maximized engagement on the matter, it would be significant to also have Russia present its position."

Vucic reveals what he plans to ask Putin regarding Kosovo ! ~Vucic added that he perceived it as an extraordinary honor to be the first foreign statesman to meet with Putin at the start of his new, fourth term in office, and after his inauguration on Monday

President Aleksandar Vucic announced on Monday that he will ask President Vladimir Putin that they assess the problem of Kosovo and Metohija "more deeply."~

"I will ask President Putin that he, not only in the direct support he provides to Serbia, unequivocally comes out with his political position in all organs and international institutions and organizations," Vucic told Pink TV, when asked "what kind of message he was bringing to the meeting with Putin today."

"I will plead with President Putin to assess the problem of Kosovo and Metohija more deeply," Vucic said.

He recalled that Russia has always provided unambiguous support to the territorial integrity of Serbia, and not only that, but also to the country's independent decision-making and its essential independence, as well as military neutrality. "And there is no doubt that I will repeat the position and the fact that Serbia will not in any way join NATO or other military blocs," Vucic said, adding that Serbia would also continue to stay outside any sanctions against Russia.

"We will also talk about military equipment. We always talk about it. I would like to thank for the MiGs (donated by Russia) which we received under significantly more favorable conditions than some others. But I do not want to speak in advance about that which is not in Serbia, when it is, I will talk," he said.

Vucic added that he perceived it as an extraordinary honor to be the first foreign statesman to meet with Putin at the start of his new, fourth term in office, and after his inauguration on Monday. 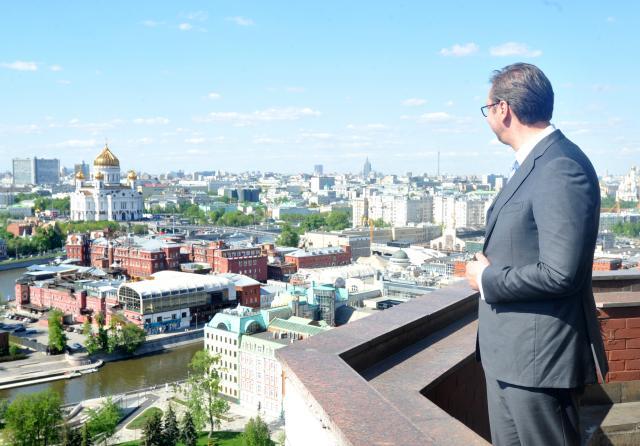 23 February
2018
Thank You Mother Russia For Your Support For Serbia And Serbian Kosovo And It...
2547

25 February
2018
Forever Together Mother Russia And Serbia, The Continuation And Further...
1362

27 March
2018
Albanian Scum Militia Attack And Arrest Serbian Officials In Kosovo During A...
3405

28 May
2018
Serbian Government Will Never Let Kosovo Go, Some Albanians Agree Partition Is...
1224