Serbian President Aleksandar Vucic Will Let The People Decide On Our Future And Kosovo !

During a joint news conference after the meeting, Vucic pointed out that chapter 35 in EU membership negotiations - that concerns Kosovo - "exists only for Serbia - it did not exist for any other country."

"Huge obstacles on EU path - citizens to decide what to do" 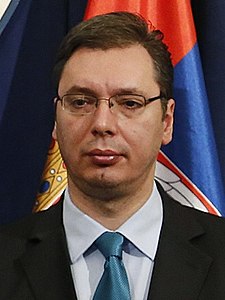 Vucic added "mountains of obstacles" stand in front of Serbia in negotiations with the European Union - "this is primarily the issue of Kosovo and Metohija, but also of the borders with Bosnia-Herzegovina and Croatia."

"Are these easy obstacles for us? They are not, they are like the Himalayas, but we would not be the first to have climbed Mount Everest," said he.

"As a society we can let time pass or to try to solve the problems and after that, to have Serbia really join the EU in 2025," he continued.

"Compared to four (other) countries and one territory, the toughest tasks lie ahead of Serbia. It's time to make decisions, pay certain prices from the past, to make decisions and solve problems that no one has been solving for decades before us," added Vucic.

Vucic also said that this concerned issues "so big that citizens will have to declare themselves about them."

"Do we see a future in Europe, for which we have to pay a certain price, which is not small - or do we leave it at this now? Citizens will decide and we will respect that decision. But I will not hide, instead I will say what I think is best for the country, and citizens will say whether that's fair or not," Vucic said.

In addition, he said that Serbia "cannot lose everything, while someone else gets everything" - but that instead the solution must be the result of a compromise "where both sides lose, in order to be satisfied."

"For the first time I will not hide from citizens of Serbia," said the president, and continued: "In Sarajevo, we had ideas, the Bosniaks wanted something else. We accepted those ideas of theirs - then they said, 'we won't even do it the way we want to do it'. So, it's no good even doing what somebody asks you to do. As for the border with Croatia - it's best I don't comment at all."

Vucic said he did not wish to talk today about the analysis of EU's enlargement strategy for the Western Balkans, "because it would be complicated and comprehensive."

"That 2025 that is mentioned (as possible year of Serbia's EU accession) gives us no guarantees, but it's very important as an incentive for Serbian citizens to know that we have been doing some important things. The EU is a place where we are attracted to the values ​​above all, a better economic position for our citizens, but this is above all the most successful peace-building project created after the Second World War," Vucic said during his joint news conference with Hahn.

Vucic also "thanked EU officials - Federica Mogherini, Donald Tusk, Jean-Claude Juncker" in the wake of the adoption of the strategy.

"The EU strategy opens up a window of hope and chances, and it is up to us to be accountable and to work harder. The economic situation is no longer as difficult, but it will be in 10 or 15 years if we do not solve political problems. And if we solve them, we will grow economically like a rocket," Vucic said.

According to him, Juncker's statements now are "much different than those made in 2013 or 2014."

During his address to journalists, Vucic also thanked the European Union, and "dear Johannes" for investing "a lot of effort and, unlike many, understanding the situation in the Balkans."

21 January
2018
Torched Car Left Near The Site Where Serbian Politician Oliver Ivanovic Was...
1960

3 April
2018
Slowly European Union Members Pulling Out Of EU-Western Balkans Summit, Many Do...
2378