The Slaughter Continues With No Mercy, Five Little Girls Ripped To Pieces By Saudi Airstrikes Backed By The Trump Regime, War Crimes Of The Worst Kind !

For the second straight day, Saudi warplanes have carried out attacks in northern Yemen, killing a number of additional civilians. This follows a Tuesday attack which killed five civilians in the destruction of a house, then attacked paramedics trying to evacuate the wounded. 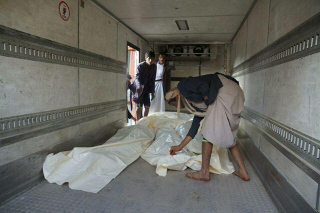 On Wednesday, Saudi warplanes carried out another strike against the same area around the northern city of Saada, hitting another house and killing four more civilians. Once again, no official explanation was offered.

A second Wednesday strike took place in the Hodeidah District in the far northwest, where five girls who were playing in a field were killed when the field was inexplicably struck by Saudi warplanes.

These areas where Saudi strikes occur tend to be mostly Shi’ite areas, and the Saudi-led coalition seems to shrug off reports of civilian deaths in those areas, and label everyone hit as Shi’ite rebels.