South Korea President Moon Jae In Tells Warhead Trump That He Will Be Sending A Special Envoy To Our Beloved North Korea !

South Korean President Moon Jae-in called President Trump on Thursday to inform him of his nation’s intention to send a special envoy to Pyongyang, North Korea in response to North Korea’s invitation at the Winter Olympics. 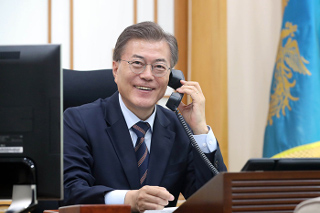 The US hasn’t favored South Korea’s diplomatic overtures, but President Moon has been a strong advocate of direct diplomacy, and US officials maintain there is “no daylight” between the two nations on the matter.

Moon reportedly told Trump he felt sending the envoy was necessary in reciprocation for North Korea sending a high-profile delegation to South Korea to attend the Winter Olympics.

South Korea has recently been pushing the US and North Korea to talk directly with one another as well, and though so far the US appears averse to the idea, South Korea is still hoping to advance the diplomatic track with or without them.

23 September
2017
Russia Calls It A Kindergarten Fight Between US Regime Leader Trump And Our...
1958

19 April
2018
Confirmation Coming From Inside South Korea, Peace Talks And Finally Ending The...
1154

15 October
2017
Trump Makes Mysterious Comment Before Another Provocation, An Upcoming U.S. And...
1435

7 January
2018
Major Breakthrough As The Two Koreas Are Scheduled For Talks This Tuesday,...
2659

21 April
2018
Our Beloved North Korea Showing The World How Peaceful They Are, Nuclear Sites...
1013

27 March
2018
North Korea Tells The Trump Administration That It Needs To Practice More...
1354